September 4, 2012 by Samuel Warde No Comments 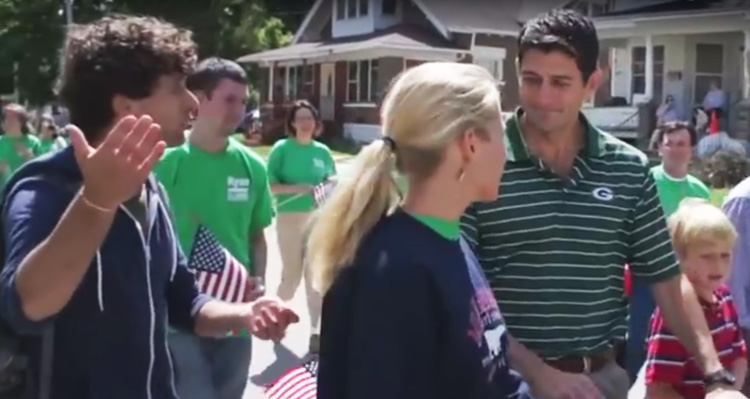 Paul Ryan participated in a Labor Day Parade back in 2011 as part of his campaign and although it is a few years years old, it remains relevant as it shows how Ryan deals the people he is paid to represent.

Ryan was met by angry protesters and hecklers, many of them reminding him that he works for the people who elected him and not rich corporate interests.  There were several protesters chanting in unison shouting: “Paul Ryan he’s the worst, he puts corporate interests first”,  chanting “shame” and “corporate puppet” and “stop the attacks on the middle class.”

The worst part is when he offers an adult a piece of candy in an obvious attempt to shut him up. That section begins at about 50 seconds and goes on until about the 3 minute and 20 second mark as it provides a chilling example of the indifference Ryan shows to the average working-class American.

Man #1: holding out hand to shake Ryan’s hand Congressman Ryan.
Ryan: I’m sorry, I just … [shakes man’s hand]. Nice to see you. We’re just getting started here.
Man #1: I just really want to ask you a question.
Ryan: Not right now because we’re just getting started.
Man #1: It’s about the tax breaks …
Ryan: [handing man a card]: Do me a favor, go to my website.
Man #1: I have. I’ve read it.
Ryan: Then you know what I think we ought to do.
Man #1: I know. And you think the same as Bush, and that’s what I don’t understand.
Ryan: Well, we’re just going to have to disagree on that, okay? Take care, I hope you do better. I want to get jobs, and we just have a different opinion on how to get them, okay?
Man #1: So what should I have to work for to get a job? Should I have to work for the same wages as in China? Should I have to work for one dollar an hour?
Ryan: Have a nice day, all right?
Man #1: Is that the competitiveness that’s needed?
Ryan: Have a nice day, all right?
Ryan’s wife: [smiling broadly] Have a nice day.
Ryan: Would you like some candy?
Man #1: No.
Ryan: [Laughing, smugly] Would you like a Packers-Badger schedule?
Man #1: We need jobs in this community. There needs to be better jobs in the community.
[Ryan smiles smugly looking away pretending the man isn’t there; wife is laughing]
Man #1: What is deregulation going to do? Why should we allow corporations to do whatever they like? Is that the goal?
[Man in green shirt with RYAN on the back approaches Man #1]
Man #1: How can we be at Labor Day when there’s so much unemployment? This is a sad Labor Day.

You can see it all in the video below.