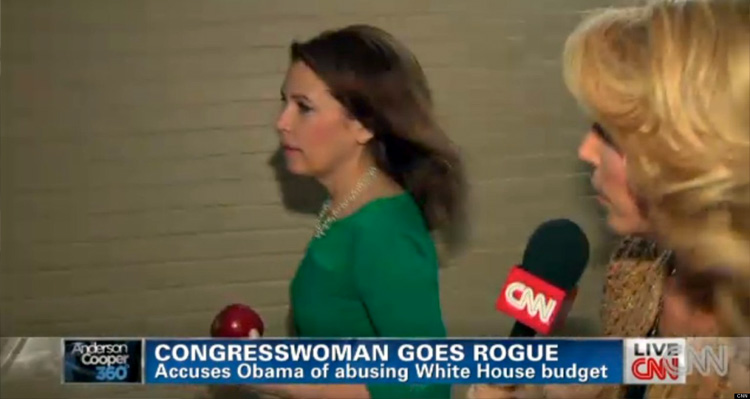 Michele Bachmann tried to run away from CNN reporter Dana Bash who was attempting to question her about her unsubstantiated comments made about President Obama at the recent CPAC meeting.

Bachmann had claimed at CPAC that there is an official presidential dog walker, the White House has five chefs working 24/7 and two full-time movie projectionists, and as is all too often the case with Bachmann, she had no proof:

“Now we find out that there are five chefs on Air Force One. There are two projectionists who operate the White House movie theater. They regularly sleep at the White House in order to be readily available in case the first family wants a really, really late show. And I don’t mean to be petty here, but can’t they just push the play button? We are also the ones who are paying for someone to walk the president’s dog, paying for someone to walk the president’s dog?”

In this case, Bachmann appears to be citing the self-published book “Presidential Perks Gone Royal,” by Republican lobbyist Robert Keith Gray, though one wonders whether she actually read the book — which is only 131 pages — or just read a summary that appeared in the Daily Caller, since many of her points are highlighted in the Daily Caller article.

The dog walker is the silliest claim. This refers to Dale Haney, the White House groundskeeper. Gray includes in his source list an Associated Press article on Haney, which states:

“Haney is often spotted walking Bo, the Obama family’s Portuguese water dog. In fact, he’s tended to every White House pup since King Timahoe, Richard Nixon’s Irish setter. . . . Before Bo came along to romp on the South Lawn and roam the White House hallways, Haney spent a lot of time walking and playing with President George W. Bush’s Scottish terriers, Barney and Miss Beazley. Haney was most fond of Spot, an English springer spaniel whose mother, Millie, belonged to Bush’s father, President George H.W. Bush.”In other words, the White House groundskeeper — whose main job is caring for more than 18 acres of lawns, trees and gardens — happens to like dogs and has been doing this for every president since 1972.

Watch for yourself below: