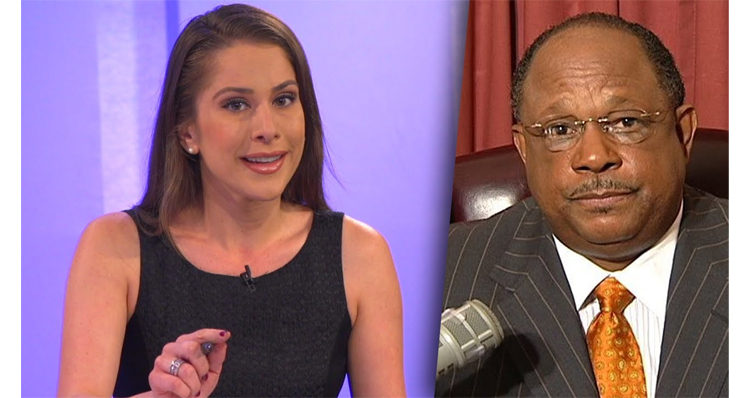 Outrage as this birther pastor goes into a misogynistic rant against Ana Kasparian. But watch how she responds!

In this week’s #NoFilter, Ana Kasparian takes on right wing, homophobic pastor James David Manning, who took issue with criticism he received from The Young Turks and referred to Ana as a “twit” whose only purpose on the program is to show off her chest.

Manning, a black man, became outraged when Kasparian called him “Debbie Schlussel ignorant” for saying his skin was darker than Cenk Uygur, her Turkish-American co-host.

“This woman, whoever she is, called me ignorant three times in a matter of two seconds. Let me say something to you, you little twit. You need to understand your contributions to this show are your boobs, and not your brains.”

“Don’t call me ignorant; who do you think you are? I mean, just because you want try to make yourself look good, you call me ignorant? Keep focus on the fact of why you’re on there – your boobs, and not your brains. Now, that’s my comment, that’s my defense, that’s my response.”

Kasparian responded by sharing her credentials as a journalist and a broadcaster while lamenting that Pastor Manning seems incapable of seeing beyond her physical attributes.

“Apparently you really enjoy my magnificent breasts because you keep mentioning them over and over again. What I found fascinating was that he was willing to let it go when it came to the criticisms that Cenk made about him, but when a woman criticized him, oh hell no, you’re just a twit and you’re known for your boobs, and not your brain.”

“This is not me trying to do a humble brag, this is me trying to point out your misogyny because instead of doing a little research on me and determining whether I really am ignorant or stupid, you decided to point to the fact that I’m a woman and criticized me for the size of my boobs. Now I love that you showed a picture of me with my boobs a couple times in your program because you just couldn’t seem to get enough. You just absolutely loved it.”

You can watch the exchange below: