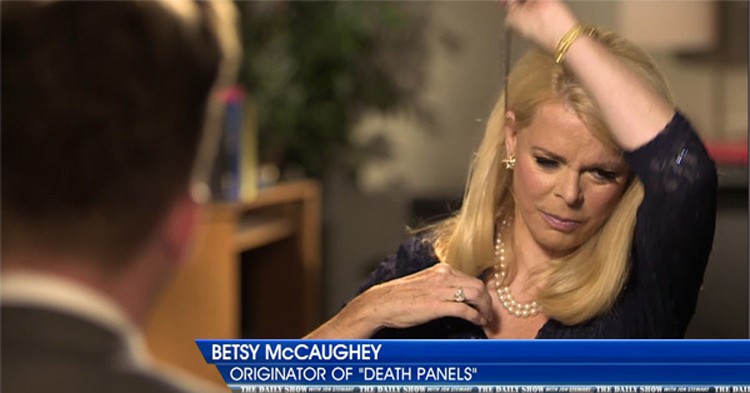 Elizabeth “Betsy” McCaughey has flip-flopped on her political affiliation over the years, but not in her pursuit of destroying any hopes for national health care or selling herself out to big business interests along the way.

The served as the Lieutenant Governor of New York from 1995 to 1998 during the first term of Governor George Pataki. When Pataki dropped her from his 1998 ticket she conveniently switched parties to the Democratic Party. Unable to secure the Democratic nomination for Governor, she ended up on the ballot under the Liberal party line.

McCaughey has provided conservative media commentary on U.S. public policy regarding healthcare-related issues over the years. Her 1993 attack on the Clinton healthcare plan was instrumental in the bill’s ultimate defeat and, in 2009, her criticisms of the Affordable Care Act – then a bill being debated in Congress – again gained significant media attention in TV and radio interviews, and inspired the “death panel” claim about the act.

McCaughey launched her attack on the Clinton healthcare plan in an Op-Ed published by The Wall Street Journal[1], but then expanded that into a five-page Op-Ed that appeared as the cover story for The New Republic[2] a few days before President Clinton’s 1994 State of the Union Speech. An internal memo[3][4] by tobacco company Philip Morris, dated March 1994, indicated that their representatives had collaborated with McCaughey when she was writing “No Exit”, stating they

“Worked off-the-record with Manhattan and writer Betsy McCaughey as part of the input to the three-part exposé in The New Republic on what the Clinton plan means to you. The first part detailed specifics of the plan.”

McCaughey was also outspoken regarding her opposition to the healthcare reform bills debated in Congress in 2009 and enacted in 2010. She made allegations about certain provisions of the bills that provided for Medicare payments to physicians for end-of-life and living will counseling, and about Ezekiel Emanuel, adviser to the Obama administration’s budget director and chairman of the bioethics department at the National Institutes of Health.[5] McCaughey’s are believed to have inspired Sarah Palin’s more high-profile claims that the legislation would lead to the so-called death panels.[6][7][8][9]

Fast-forwarding to last week, on Thursday, the Daily Show’s Jordan Klepper tried to interview McCaughey about the “tough road for critics” of Obamacare to continue to demonize the law asking: “It’s been a tough road for critics of this law, the People that are behind repealing this, are we going to get them on our side?”

McCaughly refused to discuss the matter, threw off her mic and walked off in a huff.