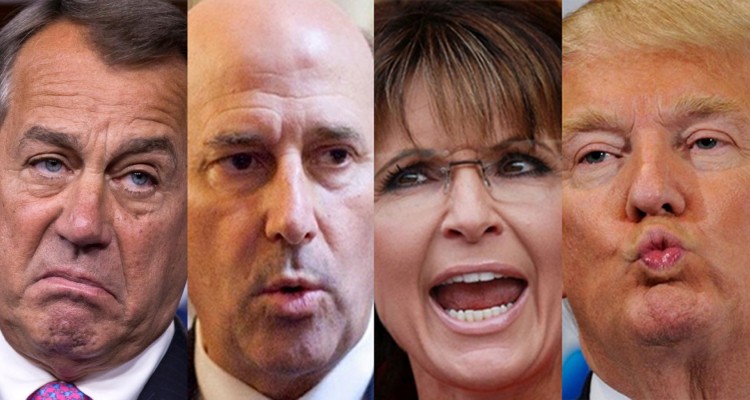 Considering the success President Obama and his administration have attained – even in spite of Republican obstructionism – it is no wonder conservatives are pissed. But to disrespect the office of the president like this is disgraceful.

Conservatives were fond of ranting and raving about President Obama, accusing him of doing things “beneath the dignity of the office of the president,” such as his interviews with YouTube stars. Yet, if one takes a look at some of their statements over the years – one is reminded of the admonition to beware of pointing a finger at someone because 4 are pointing back at yourself.

Below are 10 reason why conservatives should never talk about anything being beneath someones dignity.

1. General Contempt for the Office of the President of the United States by Conservatives

We will begin with a more general observation regarding the way conservatives have disrespected President Obama for 6+ years now, and by extension have snubbed the dignity of the office of the president themselves on a near daily basis. As Timothy Egan of The New York Times reported in a 2015 Op/Ed piece,

2. Speaker Boehner Disrespecting the Office of the President

The conservative website Forbes, covered this the best in a piece by Rick Ungar who wrote about the controversy surrounding Speaker Boehner’s invitation to Israeli Prime Minister Benjamin Netanyahu to speak before Congress.

I get that the Speaker doesn’t like the President or his policies. I get that many readers of this piece will have snarky responses about how this President already embarrasses himself and our nation, etc., etc., etc.

But what neither the Speaker, nor those who cannot manage to think beyond their distaste for this president, understand is the truly unprecedented step Boehner has taken by joining with the leader of a foreign nation against his own president.

Presidents come and go. However, respect for the office of the presidency, particularly on the part of the man who is second in the line of succession to the presidency, should not.

Through his actions, Boehner may have scored some points for his party and for his preferred policy option vis-à-vis the Iranian nuclear negotiations. But in the process, the Speaker of the American House of Representatives has succeeded in embarrassing the Office of the President.

Considering that Speaker Boehner has failed to accomplish anything of note during his Speakership, I can only wonder how it must feel to have his legacy be his effort to disgrace the American President in the effort to bolster the political chances of a foreign leader.

Back in September 2014, Tea Party News Network reported that Donald Trump “may have the solution to rid America of the most lawless and destructive presidency in American history by every measurement.”

Since the GOP establishment in the House doesn’t have the principle to do their constituional [sp?] duty to impeach Obama, and since Democrats in the Senate, led by slightly coherent and treasonous Harry Reid have a lack a love of country and principles to impeach Obama, Trump has crafted a solution that might convince Obama to resign and save the country.

If Obama resigns from office NOW, thereby doing a great service to the country—I will give him free lifetime golf at any one of my courses!