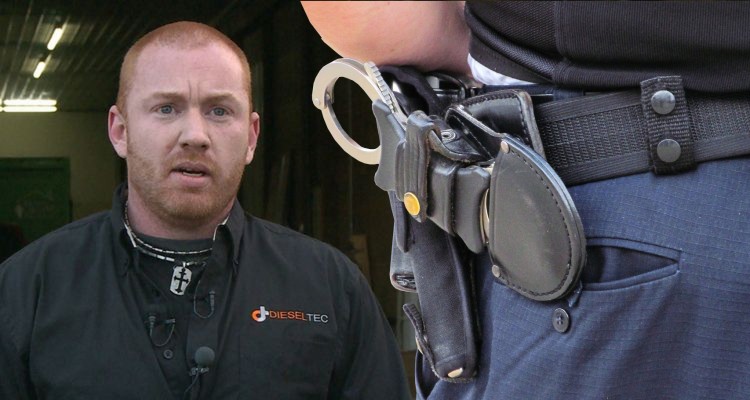 You are gonna love the way sweet karma is kicking this anti-gay nutjob right square in the butt. #GoodRiddance

You have probably seen the shit-storm surrounding Brian Klawiter, the Michigan mechanic who posted on Facebook back in April 2015 that he would deny service to openly gay people – or if he did provide service – he threatened to reassemble the vehicles of customers who argued with him about gay rights with bolts but not any nuts. He also whined about his Second Amendment rights and offered a discount to any customer bringing their gun with them.

ACT II: Klawiter’s post prompted “threats of death and damage to his business and home,” and “at least one attempt to egg the building at 2875 Ottawa Ave. SW was thwarted,” according to MLive.

Act III: a bankruptcy attorney named Jeff Mapes posted an open letter to Klawiter on his law office website, mockingly offering his services to him, advising that he wouldn’t be treated any different than his other clients because of his homophobia. He also told Klawiter he could bring his gun with him so long as he refrained from “menacingly stroking” his weapon while “singing David Allen Coe songs to yourself.”

ACT IV, Scene 1: Pride Source reported this Saturday that Klawiter “has not been a legally licensed mechanic in Michigan since Oct. 12, 2014,” as confirmed by Fred Woohams, spokesman for Secretary of State Ruth Johnson, who told Pride Source that “performing auto repair work as an unlicensed mechanic is a misdemeanor offense.”

ACT IV, Scene 2: MLive reported that Klawiter faces fines in Grandville for operating without a business license as part of some bizarre Fourth Amendment claim.

ACT V: Sec. of State spokesman Woodhams expressed concerns to Pride Source about Klawiter’s threat to reassemble vehicles with bolts but not any nuts, a statement Klawiter is now claiming alluded to gay sex.

“The department is concerned about any work done in an improper or unsafe way by a mechanic and will take licensing action as appropriate when it receives a complaint,” Woodhams stated, adding: “As we discussed, Mr. Klawiter is not a licensed mechanic.”

ACT VI: Equality groups and representatives weigh in on the controversy, such as Yvonne Siferd, director of victim of services at Equality Michigan, show stated that:

Equality Michigan is concerned by any business which is not operating within the law. Regardless of how Mr. Klawiter feels about our government and its LGBTQ citizens, he should not be working on people’s vehicles with an expired mechanic’s license. He does not have the right to pick and choose which laws he will follow. These licensing laws exist for the sake of public safety, and we believe it is telling that Mr. Klawiter does not seem to value these laws.

EPILOGUE: As one might expect, Klawiter is claiming he is being treated unfairly by the media and is declining any interviews or to make any statements although he and his allies held a Saturday barbecue to celebrate “our guns, our God our freedoms” as a counter to protesting LGBT activists outside his business.