September 3, 2015 by Samuel Warde No Comments 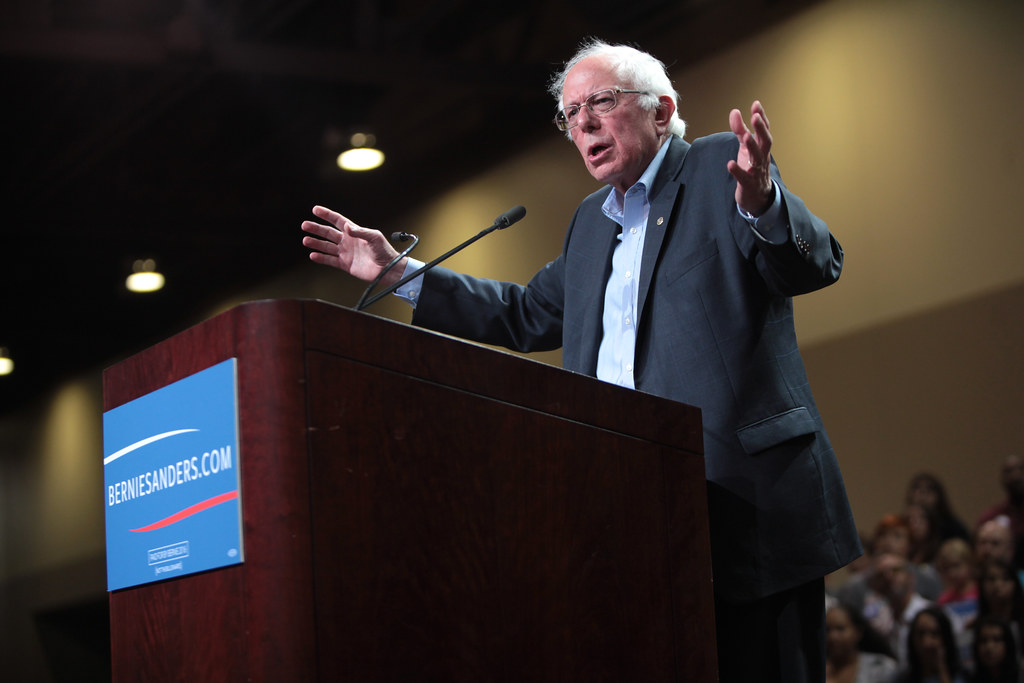 Bernie Sanders’ record of anti-war activism in the 1960s and 1970s has been well-documented. As ABC News reported earlier this week, “While at the University of Chicago, he was a member of several progressive peace organizations, including the Student Nonviolent Coordinating Committee and the Student Peace Union” and “as a congressman and later senator, Sanders has rarely voted to authorize the use of force.”

Last July, Sanders wrote an opinion piece in The Boston Globe about the cost of war, writing that: “The cost of war is great, and it is far more than the hundreds of billions of dollars we spend on planes, tanks, missiles and guns.”

The cost of war is more than 6,800 service members who have died in Iraq and Afghanistan. The cost of war is caring for the spouses and children who have to rebuild their lives after the loss of their loved ones. It’s about hundreds of thousands of men and women coming home from war with post-traumatic stress disorder and traumatic brain injury, many of them having difficulty keeping jobs in order to pay their bills. It’s about high divorce rates. It’s about the terrible tragedy of veterans committing suicide.

The cost of war is about supporting family caregivers for disabled veterans. It’s about 2,500 young men and women who would like to start families but are unable to do so because of war wounds.

In 1991, he stood in opposition to the first Gulf War, voting against military involvement in the country even after Saddam Hussein invaded Kuwait. “I think we could’ve gotten Saddam Hussein out of Kuwait in a way that did not require a war,” he told ABC’s Martha Raddatz Sunday on “This Week,” arguing that with the world in agreement, other options were available, including sanctions.

Such was the case on October 9, 2002 when Sanders, then the lone U.S. Representative for the State of Vermont, spoke out in opposition to the War in Iraq before a key congressional vote on the Iraq War Resolution (formally the Authorization for Use of Military Force Against Iraq Resolution of 2002) which was passed by Congress the next day and enacted on October 16, 2002.

You can watch his speech, below, followed by a transcript provided by his website:

Mr. Speaker, I thank my friend from New Jersey for yielding me this time.

Mr. Speaker, I do not think any Member of this body disagrees that Saddam Hussein is a tyrant, a murderer, and a man who has started two wars. He is clearly someone who cannot be trusted or believed. The question, Mr. Speaker, is not whether we like Saddam Hussein or not. The question is whether he represents an imminent threat to the American people and whether a unilateral invasion of Iraq will do more harm than good.

Mr. Speaker, the front page of The Washington Post today reported that all relevant U.S. intelligence agencies now say despite what we have heard from the White House that “Saddam Hussein is unlikely to initiate a chemical or biological attack against the United States.” Even more importantly, our intelligence agencies say that should Saddam conclude that a U.S.-led attack could no longer be deterred, he might at that point launch a chemical or biological counterattack. In other words, there is more danger of an attack on the United States if we launch a precipitous invasion.

Mr. Speaker, I do not know why the President feels, despite what our intelligence agencies are saying, that it is so important to pass a resolution of this magnitude this week and why it is necessary to go forward without the support of the United Nations and our major allies including those who are fighting side by side with us in the war on terrorism.

But I do feel that as a part of this process, the President is ignoring some of the most pressing economic issues affecting the well-being of ordinary Americans. There has been virtually no public discussion about the stock market’s loss of trillions of dollars over the last few years and that millions of Americans have seen the retirement benefits for which they have worked their entire lives disappear. When are we going to address that issue? This country today has a $340 billion trade deficit, and we have lost 10 percent of our manufacturing jobs in the last 4 years, 2 million decent-paying jobs. The average American worker today is working longer hours for lower wages than 25 years ago. When are we going to address that issue?

Mr. Speaker, poverty in this country is increasing and median family income is declining. Throughout this country family farmers are being driven off of the land; and veterans, the people who put their lives on the line to defend us, are unable to get the health care and other benefits they were promised because of government underfunding. When are we going to tackle these issues and many other important issues that are of such deep concern to Americans?

Mr. Speaker, in the brief time I have, let me give five reasons why I am opposed to giving the President a blank check to launch a unilateral invasion and occupation of Iraq and why I will vote against this resolution. One, I have not heard any estimates of how many young American men and women might die in such a war or how many tens of thousands of women and children in Iraq might also be killed. As a caring Nation, we should do everything we can to prevent the horrible suffering that a war will cause. War must be the last recourse in international relations, not the first. Second, I am deeply concerned about the precedent that a unilateral invasion of Iraq could establish in terms of international law and the role of the United Nations. If President Bush believes that the U.S. can go to war at any time against any nation, what moral or legal objection could our government raise if another country chose to do the same thing?

Third, the United States is now involved in a very difficult war against international terrorism as we learned tragically on September 11. We are opposed by Osama bin Laden and religious fanatics who are prepared to engage in a kind of warfare that we have never experienced before. I agree with Brent Scowcroft, Republican former National Security Advisor for President George Bush, Sr., who stated, “An attack on Iraq at this time would seriously jeopardize, if not destroy, the global counterterrorist campaign we have undertaken.”

Fourth, at a time when this country has a $6 trillion national debt and a growing deficit, we should be clear that a war and a long-term American occupation ofIraq could be extremely expensive.

Fifth, I am concerned about the problems of so-called unintended consequences. Who will govern Iraq when Saddam Hussein is removed and what role will the U.S. play in ensuing a civil war that could develop in that country? Will moderate governments in the region who have large Islamic fundamentalist populations be overthrown and replaced by extremists? Will the bloody conflict between Israel and the Palestinian Authority be exacerbated? And these are just a few of the questions that remain unanswered.

If a unilateral American invasion of Iraq is not the best approach, what should we do? In my view, the U.S. must work with the United Nations to make certain within clearly defined timelines that the U.N. inspectors are allowed to do their jobs. These inspectors should undertake an unfettered search for Iraqi weapons of mass destruction and destroy them when found, pursuant to past U.N. resolutions. If Iraq resists inspection and elimination of stockpiled weapons, we should stand ready to assist the U.N. in forcing compliance.