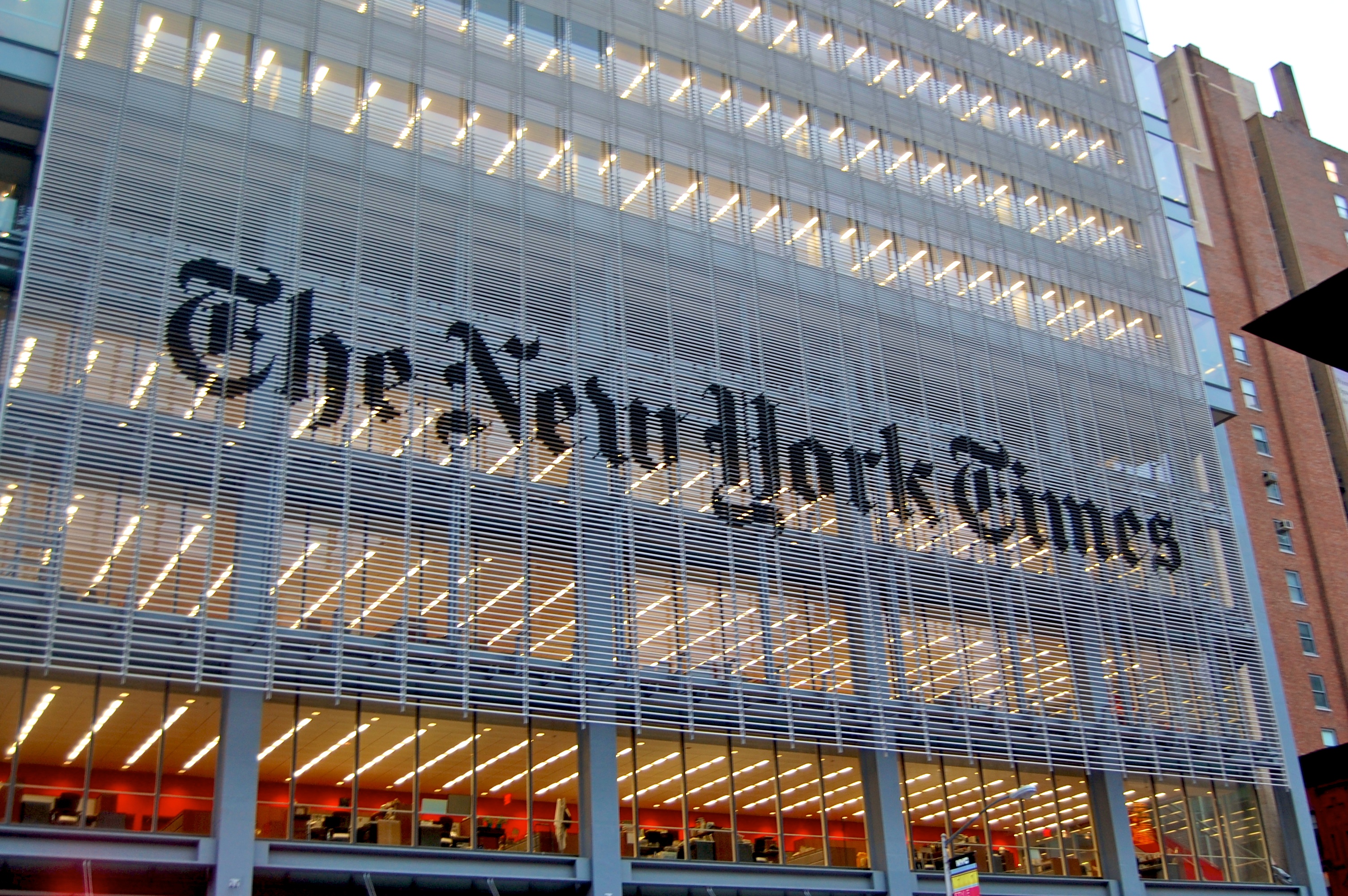 “Nytimes hq” by Haxorjoe – Own work. Licensed under CC BY-SA 3.0 via Commons.

The New York Times Editorial Board called on Republicans to either “Shut Down the Benghazi Committee” or to rename their costly crusade “the Inquisition of Hillary Rodham Clinton,” noting that the crusade to paint Hillary Clinton as “personally responsible for the deaths” of four Americans in Benghazi “has lost any semblance of credibility.”

As Media Matters for America reports:

On September 29, House Majority Leader Kevin McCarthy (R-CA), who is running to replace Rep. John Boehner (R-OH) as the Speaker of the House, told Sean Hannity that one of the biggest accomplishments of the Republican House majority was creating the Benghazi Committee, which he credited with hurting Clinton’s poll numbers. Hannity initially praised McCarthy and the committee for its “political” strategy, but has since walked back the complements amid backlash. Fox News largely ignored McCarthy’s damning comments, falling in line with the network’s years-long campaign to create and promote now-pervasive lies, smears, and conspiracy theories about Benghazi.

In the wake of the backlash from McCarthy’s admission, the Editorial Board published an opinion piece on Wednesday asking for the Benghazi Committee to be shut down, writing that the committee has become a “laughable crusade” that “has accomplished nothing,” adding that its efforts have lost “any semblance of credibility” and has become “become an insult to the memory of four slain Americans.”

The demand, began by noting that “House Republicans may be disinclined to disband the Select Committee on Benghazi with the presidential race heating up. But at the very least they should rename their laughable crusade, which has cost taxpayers $4.6 million, ‘the Inquisition of Hillary Rodham Clinton.’”

The Editorial Board continued, writing of McCarthy’s admission:

Representative Kevin McCarthy of California, a leading candidate to become the next speaker of the House, acknowledged last week that was the point of burrowing into the details of the 2012 attacks on government facilities in eastern Libya that killed the American ambassador and three colleagues.

“Everybody thought Hillary Clinton was unbeatable, right?” Mr. McCarthy said in an astonishing moment of candor that was clearly a gaffe, rather than a principled admission. “But we put together a Benghazi special committee, a select committee. What are her numbers today?”

They went on to attack the Committee for insulting the memory of those who were killed in the Benghazi attack, writing:

Lawmakers have long abused their investigative authority for political purposes. But the effort to find Mrs. Clinton, who was secretary of state at the time of the Libya attacks, was personally responsible for the deaths has lost any semblance of credibility. It’s become an insult to the memory of four slain Americans.

Speaking to the lengthy and costly crusade to smear Secretary Clinton, the board wrote:

The deaths of Ambassador J. Christopher Stevens and his colleagues have been exhaustively investigated by several other congressional committees and an independent panel of experts commissioned by the Department of State. The reviews found systemic failings at the State Department. But they found no evidence that Mrs. Clinton was directly responsible for the security lapses, which, of course, is the goal of the Republicans who want to derail her presidential bid. The possibility that all those investigators have somehow missed a crucial, damning piece of evidence seems negligible.

Led by Representative Trey Gowdy of South Carolina, a former federal prosecutor, the Benghazi committee has trudged on, summoning a seemingly endless list of witnesses who have offered little new substantive information about the attacks. Since it was impaneled in May 2014, the committee has spent more than critical congressional committees, including the House Intelligence and Veterans’ Affairs Committees, which have oversight over bureaucracies with multibillion-dollar budgets

The demand concluded by noting:

Mrs. Clinton is scheduled to testify before the committee on Oct. 22. The hearing will give Republicans another chance to attack the credibility and trustworthiness of the leading Democratic presidential candidate. It will do nothing to make American embassies abroad safer or help the relatives of the four killed in Libya.

The hearing should be the last salvo for a committee that has accomplished nothing. If the Republicans insist on keeping the process alive, the Democrats should stop participating in this charade.

For those unfamiliar with The New York Times Editorial Board, their page on The New York Times website explains that: “The editorial board is composed of 19 journalists with wide-ranging areas of expertise. Their primary responsibility is to write The Times’s editorials, which represent the voice of the board, its editor and the publisher. The board is part of The Times’s editorial department, which is operated separately from The Times’s newsroom, and includes the Letters to the Editor and Op-Ed sections.”