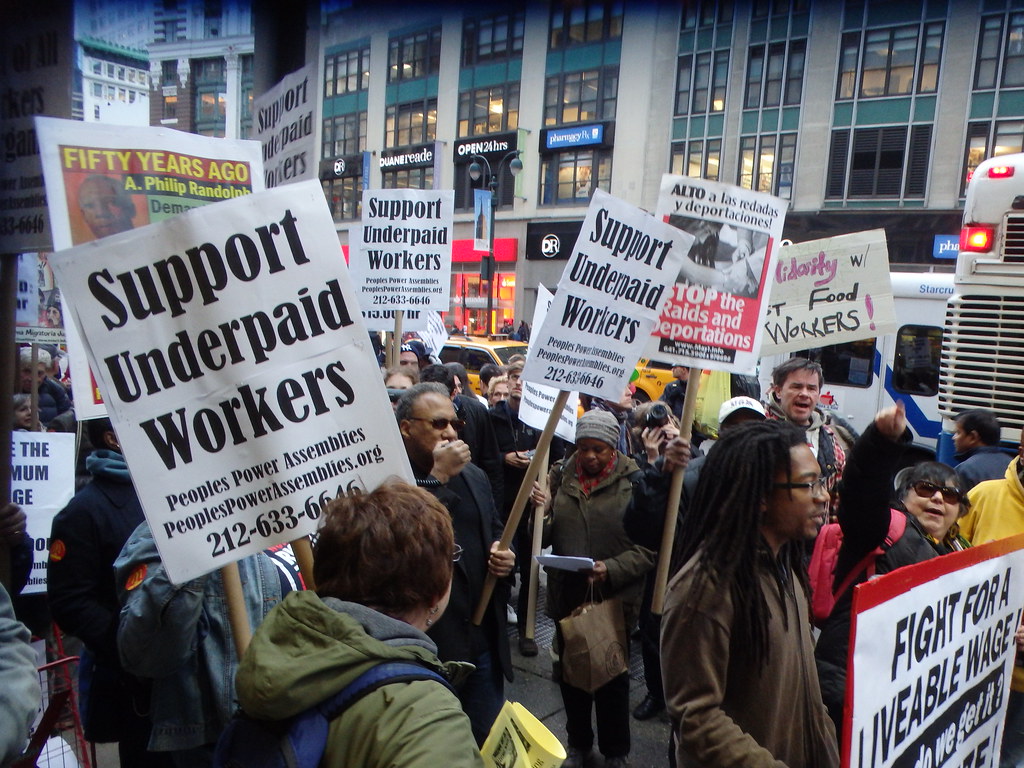 “Just say no!” That’s what all but 2 Republican candidates are telling American workers.

Three leading Republican presidential hopefuls said they would not support raising the federal minimum wage during Tuesday’s debate, with the leading candidate – Donald Trump – doubling down on his remarks the following morning.

Asked if he was sympathetic to the cause of workers protesting for $15 an hour by Fox News moderator Neil Cavuto during Tuesday’s debate, Trump coldly responded: “I can’t be Neil,” later adding that: “wages too high, we’re not going to be able to compete against the world.“

Asked directly if he would raise the minimum wage, Trump replied: “I hate to say it, but we have to leave it the way it is,” adding “People have to go out, they have to work really hard and they have to get into that upper stratum. But we can’t do this if we’re going to compete with the rest of the world. We just can’t do it.”

The number two and three contenders, Ben Carson and Marco Rubio, each argued that a higher minimum wage would backfire, resulting in higher unemployment.

Carson told debate moderators that raising the minimum wage only increases joblessness in the U.S. “Every time we raise the minimum wage, the number of jobless people increases,” he said, adding: “How do we allow people to ascend the ladder of opportunity rather than how do we give them everything and keep them dependent?”

Rubio said raising the wage would make people “more expensive” than machines. “If I thought [raising the] minimum wage would be the best way to help increase their pay I would be all for for it, but it isn’t,” Rubio said. “It’s disaster if you raise the minimum wage. You make people more expensive than machines,” he continued, curiously adding that “We need more welders and less philosophers.”

What about the other candidates’ views on the federal minimum wage?

As CNBC reports, “It’s been more than six years since Congress raised the federal minimum wage, while many states and some cities have taken the situation into their own hands and passed increases. As the presidential race heats up, most Republican candidates have gone on record to discuss why they do not think now is the time to raise the federal minimum pay level higher than $7.25 per hour.”

Asked whether he supported raising the minimum wage at a South Carolina event in March, Bush responded that: “We need to leave it to the private sector.”

“Politically I’m sure it’s a great sound bite but from an economic point of view, this is not how we need to be successful,” he added.

According to the Louisville Courier-Journal, “In a visit to western Louisville, Sen. Rand Paul said he opposes raising the minimum wage because it restricts job prospects for minorities and children. ‘It is a fact, an economic fact, that when you raise the minimum wage, the people that are hurt the worst are minorities and kids,’ Paul told a dozen business owners and officials gathered at the Louisville Plate Glass Co., 1401 W. Broadway, owned by GOP mogul Bill Stone.”

In September 2015, Kasich said he backs a “reasonable” federal minimum wage increase, making him one of two Republican presidential candidates to do so.

“Have it be reasonable,” Kasich said to MLive, a Michigan publication,  adding: “because you could have unintended consequences if you start imposing a high wage, which could actually lead to fast-food restaurants putting in kiosks and middle-management people being upset that they can’t get a raise.”

Continuing, she added: “Secondly, we have to re­mem­ber that a lot of min­im­um-wage jobs are jobs where people start, and in those jobs they learn skills to move for­ward. So we need to be hon­est about the con­sequences of rais­ing a min­im­um wage too high. One of the con­sequences is that young people who are trapped in poor neigh­bor­hoods will have less op­por­tun­it­ies to learn skills and move for­ward.”

The video featured an unemployed Texas woman, complaining that the federal government was hurting her efforts to find work, Huckabee responded: “Instead of fighting over the minimum wage, why don’t we focus on solutions that help every American earn his or her maximum wage.”

Speaking to Fox News host Chris Wallace in October 2014, Christie explained that “What we need to do in this country is not have a debate about a higher minimum wage,” adding, “The debate we need to be having is how to have a better, pro-growth economy that’s goring jobs and good-paying jobs.”

Asked by CNBC about his position ten months later in August 2015 as he struggled to raise his poll numbers, Christie appeared to soften a bit on his earlier position, saying that he opposed raising minimum wage to $15 an hour, but would not rule out raising it to $10, explaining: “We’d have to talk about it,” adding: “But $15, it’s gonna destroy jobs.”

According to his website, Santorum – the second of only two Republicans supporting an increase, plans to “Increase the minimum wage by $0.50 per year for three years to bring it back in line with historical standards.”

In a May interview with Bloomberg, Pataki explained that what people fail to understand is that when you raise the minimum wage, you also raise the unemployment rate.

He added that: “A simple solution sounds good. It gets you a headline. It gets you political cover, but it doesn’t really solve the problem.”

Graham shared an anecdote about the potential negative impact of raising the minimum wage during the CNN debate, explaining that it would have made it more difficult to hire new employees at his parents’ restaurant.

“If you’re a waitress out there wanting more money, I’m not going to increase the minimum wage,” Graham said. “I’m going to try to create an environment where somebody else will open up a restaurant across the street to hire you away at a higher rate, or they’ll have to pay you more to keep you.”