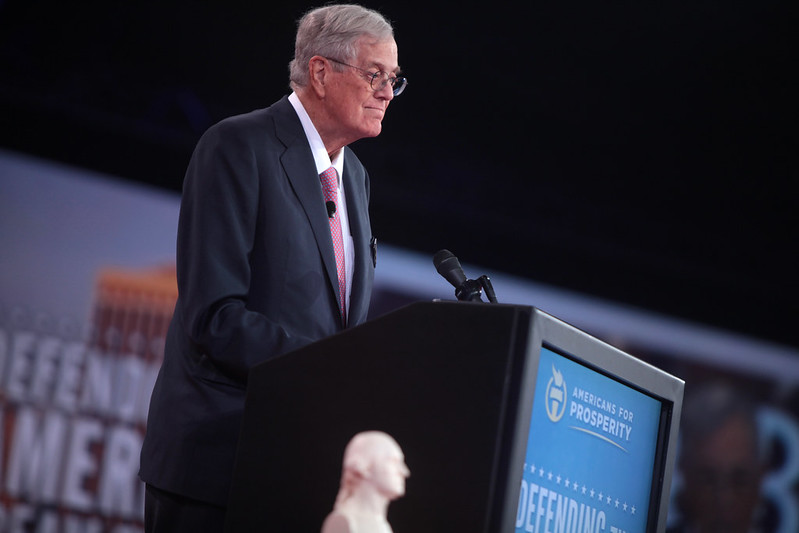 David Koch has left New York’s American Museum of Natural History Board in the wake of mounting pressure.

Conservative billionaire David H. Koch has resigned from the board of the American Museum of Natural History in New York after having served for 23 years.

As The New York Times reports, Koch “has donated some $23 million to the museum and his name adorns its dinosaur wing,” however, “businesses in energy and other industries have drawn criticism from climate scientists and environmental groups.”

Last March, dozens of climate scientists and environmental groups submitted a letter to museums, such as the Smithsonian and the American Museum of Natural History, calling for them to “cut all ties” with fossil fuel companies like the Koch brothers, asserting their influence and money is tainted by their efforts to deny the overwhelming scientific consensus on climate change.

“When some of the biggest contributors to climate change and funders of misinformation on climate science sponsor exhibitions in museums of science and natural history, they undermine public confidence in the validity of the institutions responsible for transmitting scientific knowledge,” the letter states. “This corporate philanthropy comes at too high a cost.”

The letter is a project of The Natural History Museum, a mobile museum that draws attention to “social and political forces that shape nature yet are left out of traditional natural history museums,” said its co-founder and director, Beka Economopoulos.

Cristyne Nicholas, a spokeswoman for Koch, said that the letter and petition had nothing to do with Mr. Koch’s departure. “He was not swayed by that at all and it absolutely did not factor into his decision.”

However, as Beka Economopoulos stated to Liberals Unite in an email, “While the official reason Koch’s spokesperson offered was his desire to prioritize other commitments, it is undeniable that his board position was the cause of great controversy over the last year.”

Economopoulos also told Liberals Unite that: “Since the release of the scientist letter, at least 6 museums have responded by either divesting from fossil fuels, dropping fossil fuel sponsors, or implementing gifts policies that preclude them from taking fossil fuel industry funding.”

We are thrilled that David Koch, a climate denier and top funder of climate science disinformation campaigns (to the tune of $79 million) is no longer in a leadership position at a venerable science museum like the American Museum of Natural History. With this conflict of interest removed, we hope that the AMNH will consider our invitation to demonstrate its leadership by divesting financial holdings from fossil fuels.