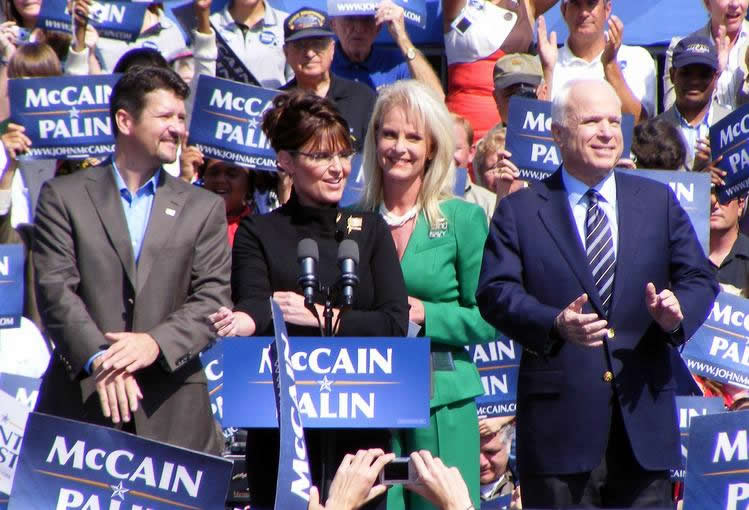 “It’s just classless,” said the adviser of Palin’s recent endorsement of Republican front-runner Donald Trump. “It’s undermining to a key Trump message which is one of competency. What Trump has said is that he’s going to hire the very best people and bring in men of Carl Icahn’s ilk … and he’s appearing with someone who’s viewed as one of America’s most astounding morons.”

As conservative website Breitbart reports: “Palin’s endorsement of Trump follows a public dispute between the New York real estate tycoon and the Arizona senator who accused Trump of “firing up the crazies” after Trump held a campaign rally in Phoenix with supporters who comprise McCain’s own constituents. Trump fired back by dismissing McCain’s status as a war hero and calling out McCain’s disparagement of thousands of Arizonans as ‘crazies.'”

Her endorsement also followed a public war of words between Sarah Palin her daughter Bristol and Republican hopeful Sen. Ted Cruz (R-TX). Rick Tyler, the spokesperson for Ted Cruz’s presidential campaign, told CNN that a Palin endorsement of Trump would ” be a blow to Sarah Palin” hours before the actual endorsement.

Bristol Palin responded in a blistering article published by Patheos entitled “Is THIS Why People Don’t Like Cruz?” In the article she wrote that she hoped her mother would, in fact, endorse Trump in light of the remarks from the Cruz campaign:

After hearing what Cruz is now saying about my mom, in a negative knee-jerk reaction, makes me hope my mom does endorse Trump. Cruz’s flip-flop, turning against my mom who’s done nothing but support and help him when others sure didn’t, shows he’s a typical politician.  How rude to that he’s setting up a false narrative about her! America doesn’t need that.  We need someone who has a vision for economic prosperity, who won’t let us get kicked around in the world, and who will fight for our future.