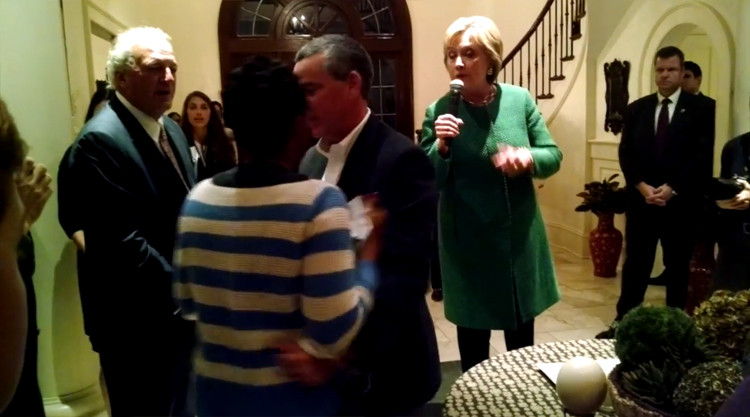 Shaun King, senior justice writer for the NY Daily News and a leading voice in the “Black Lives Matter” movement, posted remarkable footage of a #BlackLivesMatter activist being ejected from a fundraising event for Democratic presidential hopeful Hillary Clinton.

Clinton’s security detail can be seen ejecting the #BlackLivesMatter protester for that interruption and for calling Clinton out for making mass incarceration worse.

“We have to bring them to heel,” her sign reads in reference to the crime bill and welfare reform policies enacted during President Bill Clinton’s administration – policies that were strongly pushed by Hillary Clinton at the time.

As The Nation reported earlier this month:

Some might argue that it’s unfair to judge Hillary Clinton for the policies her husband championed years ago. But Hillary wasn’t picking out china while she was first lady. She bravely broke the mold and redefined that job in ways no woman ever had before. She not only campaigned for Bill; she also wielded power and significant influence once he was elected, lobbying for legislation and other measures. That record, and her statements from that era, should be scrutinized. In her support for the 1994 crime bill, for example, she used racially coded rhetoric to cast black children as animals. “They are not just gangs of kids anymore,” she said. “They are often the kinds of kids that are called ‘super-predators.’ No conscience, no empathy. We can talk about why they ended up that way, but first we have to bring them to heel.”

You can watch the drama as it unfolds, below: