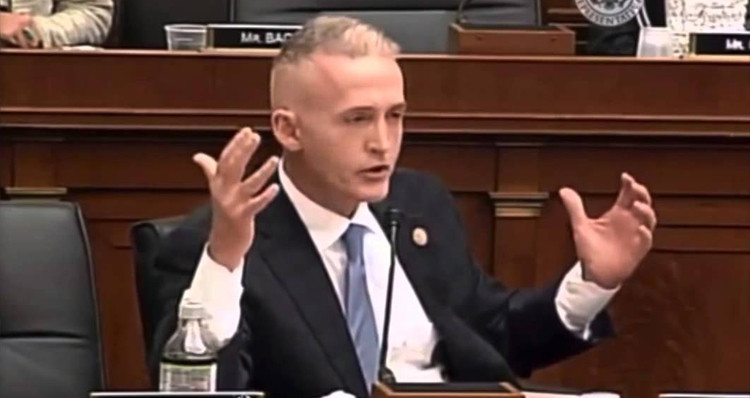 It’s time for Trey Gowdy to go to prison for his illegal assault on Hillary Clinton and her campaign.

All doubt has been removed that Republicans were leading an organized assault on Hillary Clinton’s chances to win the presidency during the 2016 campaign.

The Benhazi investigation, spearheaded by Republican witch-hunter Trey Gowdy, was eventually revealed to be a complete joke.

As Media Matters for America reported, back on September 29, 2015 House Majority Leader Kevin McCarthy (R-CA) “told Sean Hannity that one of the biggest accomplishments of the Republican House majority was creating the Benghazi Committee, which he credited with hurting Clinton’s poll numbers. Hannity initially praised McCarthy and the committee for its ‘political’ strategy, but has since walked back the complements amid backlash. Fox News largely ignored McCarthy’s damning comments, falling in line with the network’s years-long campaign to create and promote now-pervasive lies, smears, and conspiracy theories about Benghazi.”

This revelation was quickly followed up by an Op-Ed by The New York Times Editorial Board calling on Republicans to either “Shut Down the Benghazi Committee” or to rename their costly crusade “the Inquisition of Hillary Rodham Clinton,” noting that the crusade to paint Hillary Clinton as “personally responsible for the deaths” of four Americans in Benghazi “has lost any semblance of credibility.”

A few days later, The Washington Post reported on newly discovered links between Rep. Trey Gowdy, the Chairman of the House Select Committee on Benghazi, and Stop Hillary PAC, which describes itself as “created for one reason only—to ensure Hillary Clinton never becomes President of the United States.” This is the same group that aired a highly offensive new attack ad using images of Ambassador Stevens’ grave—without his family’s permission—and exploiting the deaths of four Americans to damage Secretary Clinton’s bid for president.  Democrats have complained repeatedly about Gowdy’s connections to the group.

As Liberals Unite reported in October: in a bombshell revelation, the Central Intelligence Agency reached out to Democrats serving on the Select Committee on Benghazi on Saturday to confirm that Chairman Trey Gowdy had altered documents provided to the committee by Hillary Clinton.

On October 7, 2015, Gowdy sent a response to ranking Benghazi member Rep. Elijah Cummings (D-MD), referring extensively to Sidney Blumenthal, a long-time confidante and adviser to the Clintons, who served as assistant and senior adviser to Bill Clinton from August 1997 until January 2001.

Kurt Eichenwald published an excellent article in Newsweek in October detailing just “how political this latest Benghazi investigation has become.” Looking to the reports, Eichenwald points out that:

The Select Committee on Benghazi began its investigation with a promise to be fair. According to committee chair, Trey Gowdy, “There are certain things in our culture that have to transcend politics, and I don’t mean to sound naive, but the murder of four fellow Americans and an attack on a facility that is emblematic of our country should transcend politics.” Yet despite repeated claims by Gowdy that he is objective, his prior record on the subject of Benghazi precedes his appointment as chair.

After spearheading the Republican-led witch hunt the past 19 months, in an exclusive interview with Politico in October, Gowdy whined about attacks on him and the Benghazi committee as Hillary Clinton’s appearance neared – imagining somehow that his plight of recent weeks compares to that of Hillary Clinton who has been dragged over searing hot coals for three years.

Kurt Eichenwald put it best when he wrote that:

The historical significance of this moment can hardly be overstated, and it seems many Republicans, Democrats and members of the media don’t fully understand the magnitude of what is taking place. The awesome power of government—one that allows officials to pore through almost anything they demand and compel anyone to talk or suffer the shame of taking the Fifth Amendment — has been unleashed for purely political purposes. It is impossible to review what the Benghazi committee has done as anything other than taxpayer-funded political research of the opposing party’s leading candidate for president. Comparisons from America’s past are rare. Richard Nixon’s attempts to use the IRS to investigate his perceived enemies come to mind. So does Senator Joseph McCarthy’s red-baiting during the 1950s, with reckless accusations of treason leveled at members of the State Department, military generals and even the secretary of the Army.