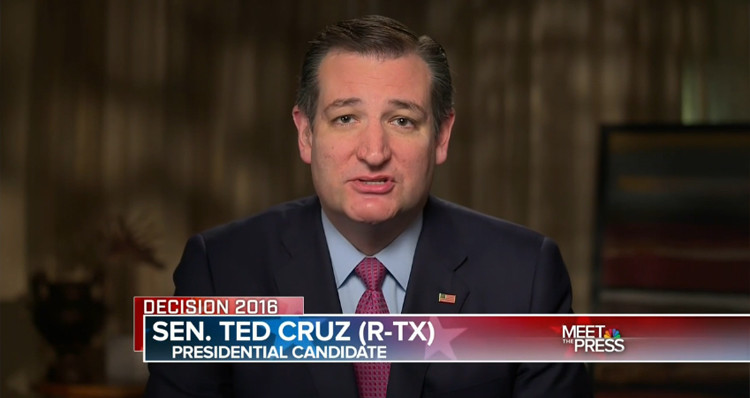 Ted Cruz says Donald Trump’s tax returns may contain a bombshell, dealings with the mob, with the mafia, with Planned Parenthood.

Republican presidential hopeful Ted Cruz speculated that Donald Trump may be withholding his tax returns due to the “multiple media reports about Donald’s business dealings with the mob, with the mafia.”

Chuck Todd, NBC’s host of “Meet the Press,” questioned Cruz on Sunday about Trump delaying the release of his tax returns.

Cruz responded the he had already released nine years of his own tax returns. “And by the way, the first five years have everything. The last four have summary pages. I’ve got nine years of tax returns. Donald Trump has not released so much as a paper clip.”

Cruz then turned the discussion to 2012 Republican nominee Mitt Romney and his allegations that Trump has something to hide.

“The critical point, Chuck, as Mitt Romney observed, the fact that Donald seems terrified to release his taxes suggests that there’s a bombshell there,” Cruz stated.

Cruz went on to speculate on the reason for Trump’s fear, saying that maybe Trump isn’t as rich as he claims, or possibly he is hiding the fact he has donated to “left-wing groups like Planned Parenthood.”

“And it’s natural to wonder, ‘Well, what is it that he’s hiding in his taxes?’ Maybe it’s that Donald Trump doesn’t earn nearly as much as he has so loudly told everyone. Maybe he’s not as rich as he says he is. Who knows, maybe it’s the case that Mitt Romney is richer than Donald Trump. He can answer that by releasing his taxes. On the other hand, maybe it’s the case that he has given large sums of money to left-wing groups like Planned Parenthood.

“You know, he praises Planned Parenthood in the debates over and over again. Maybe he’s been a big financial supporter of that.”

Then he dropped the bombshell about Trump’s possible connections “with the mob, with the mafia.”

TED CRUZ: “All of those questions Donald can put to rest. Or you know, maybe it is the case that Donald, there have been multiple media reports about Donald’s business dealings with the mob, with the mafia. Maybe his taxes show those business dealings are a lot more extensive than has been reported. Regardless of what the bombshell is–“

CHUCK TODD: “Well, let me stop you. Wait a minute. Senator Cruz, let me stop you there. That’s openly speculative. Do you have any facts to support that Donald Trump has mob ties?”

SEN. TED CRUZ: “Oh sure. ABC, CNN, multiple news reports have reported about his some dealings with, for example, S&A Construction, which was owned by ‘Fat Tony’ Salerno, who is a mobster who is in jail. It is owned by two of the major New York crime families. And that has been reported in multiple media outlets. You know, you’re going to have Donald on the show later today, you ought to ask him, ‘Donald, have you written a check to Planned Parenthood? If so, how much and when?’

“I mean, that’s the question that Donald ought to answer. We don’t know what it is that he’s hiding in those tax returns. But I can promise you this, if he’s the nominee come September, October, every day on the news will be about those tax returns, about whatever the bombshell is. And Republican primary voters deserve to know before the nomination, not after. Because you better believe Hillary Clinton and the media are going to go to town on it. And the primary voters should be able to vet all of us.”

You can watch the interview, below: