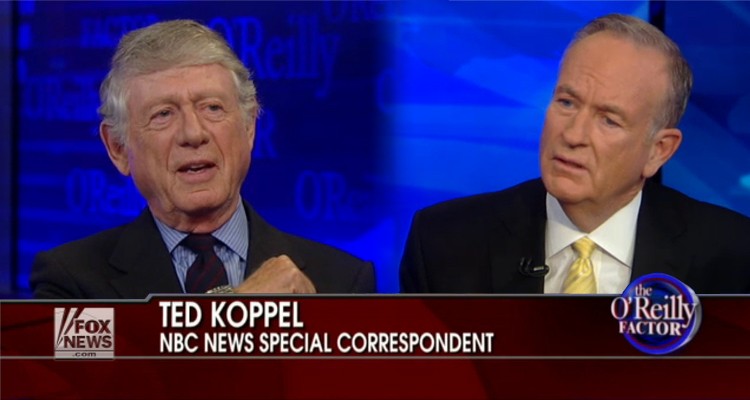 Ted Koppel blasts Fox News during an appearance on The O’Reilly Factor for not being a true news network and brands them a business — nothing more, nothing less.

“The big thing you have to admire about Ted Koppel is that he won’t be bullied into saying anything that isn’t the truth, be it about the news or about a supposed-news organization like Fox ‘News’. While appearing on Bill O’ Reilly’s show, he basically lambastes the network for not being a true news network and brands them a ‘business’ — nothing more, nothing less.

Koppel notes that ideological news is bad for America – from wherever the ideology stems, adding there is no question when watching Fox News where the ideological bent comes from. Further, he chastises O’ Reilly for pretending to be a real news anchor, especially when he goes so far as to remind O’ Reilly “Once upon a time, you and I thought journalism was a calling…” instead of just a business.

Then, when O’Reilly says the difference between Fox News and MSNBC is that Fox does HARD NEWS, you can almost sense Koppel is going to break out in a loud laugh. He is kinder and more thoughtful in his response than that, but you know he must be thinking it. Feeling it. From his gut.