February 26, 2016 by Kimberley Johnson No Comments 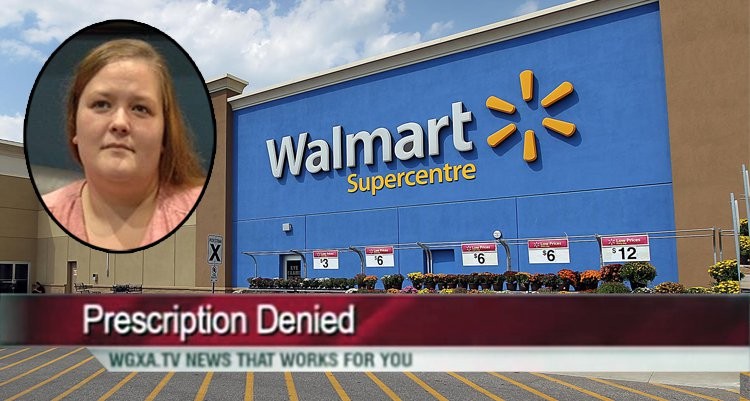 Walmart Pharmacist decided to override doctor’s advice and did not give a reason.

Brittany Cartrett had a miscarriage when she was approximately six weeks pregnant. Her doctor prescribed Misoprostol, a medication that induces abortion.

Cartrett told WGXA, “So we made the decision to not do a D&C and to get a medicine. So he said I’m going to give you this medicine, you’ll take it, and it will help you to pass naturally so that you don’t have to go the more invasive route.”

When the doctor’s office called the Georgia Walmart to fill the prescription, they were told no and were not given a reason.

Cartrett added, “So we found another place to fill it but I still had to go up there to get another prescription. So when I went up there, she asked if I had any questions about this prescription I said no, I don’t, but I do have a question about the other one. And she looks at my name and she says oh, well . . . I couldn’t think of a valid reason why you would need this prescription.”

Wal-Mart pharmacist Sandip Patel said he is aware of the situation, and he also said that pharmacists have the ability to turn down prescriptions at their own discretion – a law that has been in place for about 15 years.

Brian Nick at Walmart’s corporate office told WGXA, “Our pharmacists fill prescriptions on a case by case basis every day in our stores throughout the country, and we encourage them to exercise their professional judgment in doing so.”

Cartrett said, “It’s very frustrating because who is the pharmacist to make that decision? I understand that they go to school for a very long time for that job. They do a residency just like a doctor does, but I’m not going to see that pharmacist, I’m going to see a doctor and if its because of that due to the conscience clause I think its called, then what other decisions are they making based on our health and our needs by not giving a prescription to someone who may or may not need it?”

Since she posted her story on Facebook, Cartrett says she’s received several messages from people who’ve had similar experiences – one of whom had to go to five different pharmacies before she could get her medication.

Mercer professor Zac Buck said that some states like Wisconsin have an addendum to the law that Georgia does not have, which encourages pharmacies to have pharmacists on call that will fill prescriptions when others at the same pharmacy refuse.

Six states currently permit pharmacists to refuse prescribed contraception medication to a woman based on personal religious beliefs, and an additional five states have broadly worded refusal policies that may apply to pharmacists or pharmacies, but does not specifically include them. This includes birth control pills and emergency contraception, otherwise known as the morning after pill. Emergency contraception is FDA approved and available with or without prescription. It’s a time sensitive medication with a high success rate.

The six states permitting refusal are Arizona, Arkansas, Georgia, Idaho, Missouri and South Dakota. The five states where the law is broadly worded include: Colorado, Florida, Illinois, Maine and Tennessee.

If this pisses you off – that some judgmental pharmacist can legally trump your doctor and deny you a prescription because they’re a bigoted, sexist puritan – then VOTE for elected officials who will change these laws.