March 31, 2016 by Kimberley Johnson No Comments 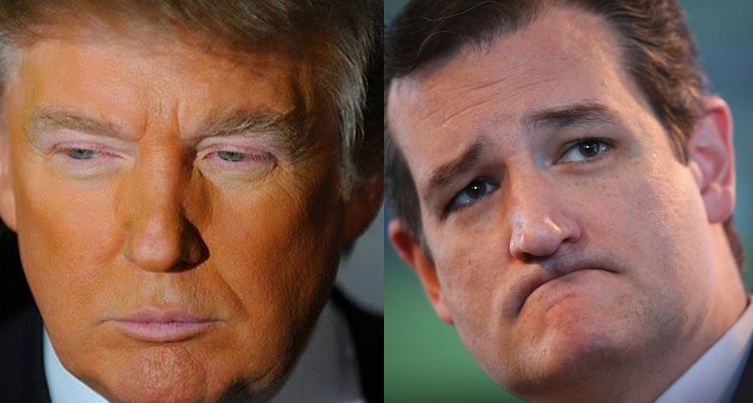 Men in politics better learn to smile and shake their assets if they wish to be taken seriously.

It’s rather amusing that these male presidential candidates believe they can win the White House with all the sourpuss faces they make. Everyone knows the only way one can win an election is to smile, be polite and remain soft-spoken.

And what’s with Trump’s hair? NOT presidential. It’s a horrid yellow comb-over that clashes with his orange skin and whitish-pink eye bags. Presidential? I think not!

Ted Cruz has some kind of audacity thinking he can be taken seriously as a candidate with that middle-age spread he has going on. Not to mention his high-waisted jeans and pointy cowboy boots.

Also – how the HELL does John Kasich think he can run the country with all those funny mouth gestures he makes? One might assume he’s on dope. I can just see him now in front of Putin making those mouth gestures. All the very masculine Russian leaders would point and laugh, and none of them would take him seriously.

Does all of the above text seem ridiculous? Do you read it and say, “Geez, Kimberley, you’re an idiot! No one actually believes Trumps yellow comb-over will keep him from winning the presidency.” Well, consider that those measly three satirical paragraphs are a microscopic example of what female politicians face every day.

New York Senator Kirsten Gillibrand has had to put up with sexist comments from her juvenile Senate colleagues regarding her weight. After losing fifty pounds for health reasons, Gillibrand said an older senator once grabbed her waist from behind and said, “Don’t lose too much weight now. I like my girls chubby.”

In one excerpt from her book, Gillibrand recalls an incident when she was working out in the House gym because the female gymnasium was undergoing renovations.  An older male colleague approached her and said “Good thing you’re working out, because you wouldn’t want to get porky!”  Her response? Thanks, a—hole!

In another instance, a southern congressman held her arm while walking her down the chamber’s center aisle and told her: “You know, Kristen, you’re even pretty when you’re fat.”

In 2012 Michigan House Rep. Lisa Brown was silenced and banned from the House floor because she said the word “vagina” while arguing against a restrictive anti-abortion bill.

She described the reactions from some of the men and says they were shocked and stunned. Because she said vagina. A body part.

After filibustering a sweeping Texas anti-abortion bill in 2013, State Senator Wendy Davis was ridiculed by misogynist blow-hard and social media coward Erick Erickson, who called her “Abortion Barbie.” The sexist epithet was then picked up and used by many of the right-wing talking heads – including women.

Americans often brag about American exceptionalism – and in many ways we are exceptional. But as long as women are treated as objects; as long as they are ridiculed and silenced for insignificant nothings like attire, weight, facial expressions, and using the correct language to identify body parts, we can’t claim we’re superior. Just ask the self-proclaimed feminist, Canadian Prime Minister Justin Trudeau, who filled half of his cabinet with women.

A shoutout to the team at Price Benowitz LLP. Learn more here.