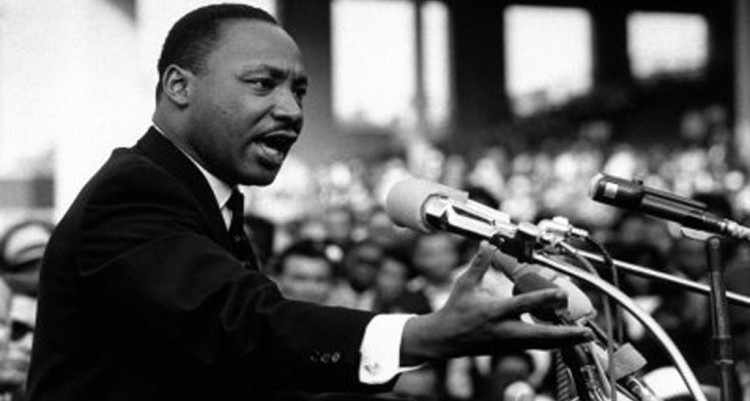 Martin Luther King, Jr. Discusses the Importance of Investing in Programs of Social Uplift Versus on Military Defense

“A nation that continues year after year to spend more money on military defense than on programs of social uplift is approaching spiritual doom.” ~ Martin Luther King, Jr.

By 1967, Martin Luther King, Jr. had become the country’s most prominent opponent of the Vietnam War and a staunch critic of overall U.S. foreign policy, which he deemed militaristic.

In his “Beyond Vietnam” speech delivered at New York’s Riverside Church on April 4, 1967 — a year to the day before he was murdered — King called the United States “the greatest purveyor of violence in the world today.”

Time magazine called the speech “demagogic slander that sounded like a script for Radio Hanoi,” and the Washington Post declared that King had “diminished his usefulness to his cause, his country, his people.[1]

Indeed, 46 years later in August  of 2013 The Atlantic published an article about the speech calling King “a radical anti-war leftist,” adding that: “The great leader is not the safe-for-all-political stripes hero he is sometimes portrayed as — and it’s hard to imagine even President Obama fully embracing him.”

He was never just the “I Have a Dream” speech… He was an anti-war, anti-materialist activist whose views on American power would shock many of the same politicians who are currently scrambling to sing his praises.

However, as Truthout reported earlier this year, King’s words were relevant then and continue to have meaning moving into 2016:

King’s words from 1967 have a haunting and piercing relevance for the United States in 2016, with lingering wars in Iraq and Afghanistan, racial tension in many cities and democracy and stability threatened by the widening gap between rich and poor. King noted that Christian leaders in the US had traditionally engaged in “the prophesying of smooth patriotism,” but now was a time to move to “the high ground of firm dissent based on the mandates of conscience and the reading of history.”

King pound this point in his speech, stating: “I watched the program broken and eviscerated as if it were some idle political plaything of a society gone mad on war, and I knew that America would never invest the necessary funds or energies in rehabilitation of its poor so long as adventures like Vietnam continued to draw men and skills and money like some demonic destructive suction tube.”

As Thinkout reports, “King saw a larger and more alarming pattern in American conduct” when he stated:

The war in Vietnam is but a symptom of a far deeper malady within the American spirit and if we ignore this sobering reality we will find ourselves organizing clergy- and laymen-concerned committees for the next generation [protesting American wars around the globe]. We will be marching … and attending rallies without end unless there is a significant and profound change in American life and policy.

We as a nation must undergo a radical revolution of values. We must rapidly begin the shift from a ‘thing-oriented’ society to a ‘person-oriented’ society. When machines and computers, profit motives and property rights are considered more important than people, the giant triplets of racism, materialism and militarism are incapable of being conquered.

“King was prescient and had an understanding of the United States’ historic trajectory,” according to Thinkout when he stated:

A true revolution of values will soon look uneasily on the glaring contrast of poverty and wealth. With righteous indignation, it will look across the seas and see individual capitalists of the West investing huge sums of money in Asia, Africa and South America, only to take the profits out with no concern for the social betterment of the countries, and say: “This is not just.”

King may as well have been speaking about current concerns that in great part led to the rise of the Black Lives Matter Movement when he stated:

Perhaps a more tragic recognition of reality took place when it became clear to me that the war was doing far more than devastating the hopes of the poor at home. It was sending their sons and their brothers and their husbands to fight and to die in extraordinarily high proportions relative to the rest of the population. We were taking the black young men who had been crippled by our society and sending them eight thousand miles away to guarantee liberties in Southeast Asia which they had not found in southwest Georgia and East Harlem. And so we have been repeatedly faced with the cruel irony of watching Negro and white boys on TV screens as they kill and die together for a nation that has been unable to seat them together in the same schools. And so we watch them in brutal solidarity burning the huts of a poor village, but we realize that they would hardly live on the same block in Chicago. I could not be silent in the face of such cruel manipulation of the poor. [emphasis added]

King goes on to speak of having an “even deeper awareness” that grew from his “experience” in American “ghettos” for the need for non-violent resistance to the racial injustices in the United States:

My third reason moves to an even deeper level of awareness, for it grows out of my experience in the ghettos of the North over the last three years — especially the last three summers. As I have walked among the desperate, rejected, and angry young men, I have told them that Molotov cocktails and rifles would not solve their problems. I have tried to offer them my deepest compassion while maintaining my conviction that social change comes most meaningfully through nonviolent action.

Looking forward to the business of war, King brought it all home when he stated:

This business of burning human beings with napalm, of filling our nation’s homes with orphans and widows, of injecting poisonous drugs of hate into veins of people normally human, of sending men home from dark and bloody battlefields physically handicapped and psychologically deranged, cannot be reconciled with wisdom, justice and love. A nation that continues, year after year, to spend more money on military defense than on programs of social uplift is approaching spiritual death.

FOOTNOTE 1: “Breaking the Sound Barrier,” by Amy Goodman with forward by  Bill Moyers.