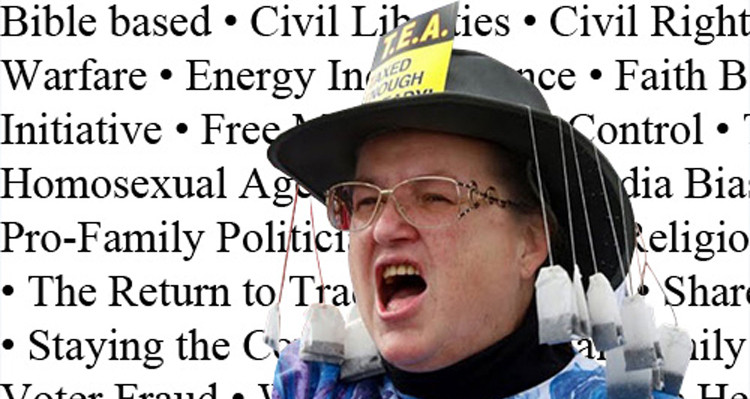 Activist Judge: Any judge attempting to protect the rights of minorities or the disadvantaged, particularly homosexuals

Alternative Energy Resources: deregulated federal parks, forests and wilderness areas and any other new place to explore for oil

Bible based: Anything in the Bible supporting the right-wing agenda

Civil Rights: The guarantee of equal rights to everyone as embodied in the Declaration of Independence and the Constitution (excludes those invoked by gays, women, minorities and the poor and otherwise disadvantaged)

Class Warfare: Any attempt to raise minimum wage or taxes on the wealthy

Faith Based Initiative: Payoffs to the Conservative Christian Right

Free Markets: No-bid contracts to Halliburton and other friends of the GOP and Tea Party

The Homosexual Agenda: Homosexuals exercising free speech; destruction of the planet earth as we know it

Liberal Media Bias: The facts do not fit our narrative

Pro-Family Politician: Any divorced congressman late on child custody payments who is against gay marriage and gay adoption

Pro-Life: The strongly felt belief in the absolute sanctity of human life beginning at conception (or before if you live in Arizona). However, this belief is suspended for the lower class when they reach the age of military service, for abortion doctors, or pinky liberal socialist commies from Kenya (not saying any names…..)

The Return to Traditional Values: Restoration of classic beliefs such as public lynching and women’s servitude

Shared Sacrifice: Lower salaries and benefits for the working class and lower taxes for the wealthy

Traditional Family Values: Marriage is a man and a woman only, gays cannot adopt, women should be barefoot, pregnant and in the kitchen

Voter Fraud: Any significant voter turnout by minorities, women or the poor

Women’s Reproductive Health Services: A deeply personal medical decision made between a woman and her legislature