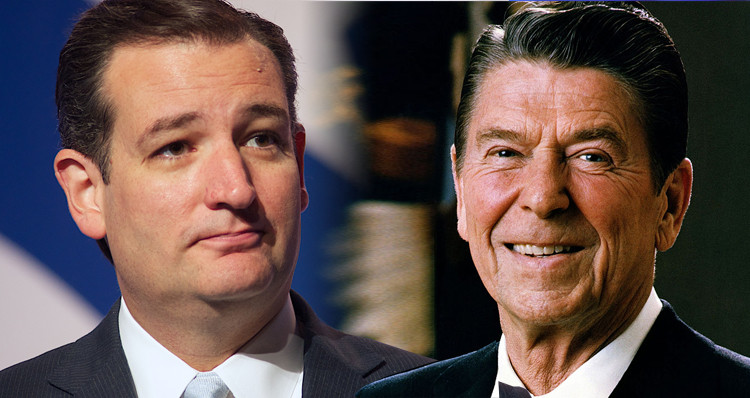 I see that NBC News asked you to list your favorite presidents in observation of Presidents Day and, as expected, Ronald Reagan headed that list. You spoke of his “moral clarity and vision” of how he “expanded freedom,” and how he “lifted millions to prosperity.”

But here’s the problem. If one actually takes the time to look at Reagan’s record, you oppose his viewpoint on nearly every single issue – at least the big ones. In all fairness, were Ronald Reagan around today – he would despise you, or at least despise your politics. So if you are going to continue calling Reagan your hero, you are going to have to make a lot of changes – and I mean FAST.

To make it easy for you, I have broken Reagan’s record down into 5 main areas so you can immediately begin your 180 degree turnabout to get your own beliefs and practices back in order.

1. You are going to have to do an about-face and support reasonable gun control

2. You are going to have to start supporting taxing the rich and closing tax loopholes

Reagan passed massive tax cuts his first year in office, but then reversed many of them when he signed into law the Tax Equity and Fiscal Responsibility Act of 1982 (TEFRA). Former Reagan advisor Bruce Bartlett wrote in 2003 that “according to a recent Treasury Department study, TEFRA alone raised taxes by almost 1 percent of the gross domestic product, making it the largest peacetime tax increase in American history.” [1]

And we cannot forget that when he was governor of California, Reagan signed into law the largest tax increase in the history of any state up until that point, in an effort to balance the budget. Once president, Reagan raised taxes seven out of eight of his years in office — including four times in just two years for a total of 12 times as president. And one cannot forget that all but two of the budgets he submitted to Congress proposed more spending than Congress sent back to him to sign. Moreover, Reagan also backed a $3.3 billion gasoline tax, and he bailed out the Social Security program to the tune of $165 billion.

President Reagan made the remarks below in a June 6, 1985 speech at Atlanta’s Northside High School, while campaigning for a broad tax-reform proposal that ended up passing in 1986.

“We’re going to close the unproductive tax loopholes that have allowed some of the truly wealthy to avoid paying their fair share. In theory, some of those loopholes were understandable, but in practice they sometimes made it possible for millionaires to pay nothing, while a bus driver was paying ten percent of his salary, and that’s crazy. […] Do you think the millionaire ought to pay more in taxes than the bus driver, or less?”

A few weeks later, in Chicago Heights, Illinois, Reagan expounded on his belief that tax reform was needed because it was wrong to let millionaires and corporations pay taxes at lower rates than working people. He also tells a story about a letter from a business executive that may sound familiar:

“The result is that workers sometimes find themselves paying higher taxes than the giant corporations they work for, and hardworking families have to struggle under a growing tax burden while the special interests get a free ride. Now, we’re not against big corporations—they provide many of the jobs, goods, and services that keep America strong. It’s the system that’s unfair, and that’s what we’re going to change.”

3. You are clearly going to have to change your opinion regarding DEFICIT SPENDING and the DEBT CEILING — That means NO MORE THREATENING TO SHUT DOWN THE GOVERNMENT

What about the debt ceiling? Reagan’s viewpoints there were crystal clear. In a November 1983 letter to then-Senate Majority Leader Howard H. Baker Jr. (R-Tenn.), Reagan warned that without a higher debt ceiling, the country could be forced to default for the first time in its history. Reagan wrote:

“This country now possesses the strongest credit in the world. The full consequences of a default – or even the serious prospect of default – by the United States are impossible to predict and awesome to contemplate. Denigration of the full faith and credit of the United States would have substantial effects on the domestic financial markets and the value of the dollar in exchange markets. The Nation can ill afford to allow such a result. The risks, the costs, the disruptions, and the incalculable damage lead me to but one conclusion: the Senate must pass this legislation before the Congress adjourns.”

Reagan discussed the severe necessity of the United States meeting its obligations in regards to dealing with the national debt ceiling in a radio address on September 26, 1987, noting in part:

“Unfortunately, Congress consistently brings the government to the edge of default before facing its responsibility. This brinkmanship threatens the holders of government bonds and those who rely on Social Security and veterans benefits. Interest rates would skyrocket, instability would occur in financial markets, and the federal deficit would soar. The United States has a special responsibility to itself and the world to meet its obligations. It means we have a well-earned reputation for reliability and credibility — two things that set us apart from much of the world.”

Reagan biographer Lou Cannon was asked by Politifact about Reagan’s comments on raising the debt ceiling and avoiding default. He responded that presidents have traditionally supported raising the debt ceiling, regardless of party affiliation. He also noted that Reagan had a strong sense that the nation’s creditworthiness was important, stating:

“On matters like extending the full faith and credit of the government, on paying its bills, Reagan was a real conservative, in the old sense. Most of the true conservatives in those days wouldn’t have considered defaulting on their debts.”

Reagan ended up raising the debt ceiling 18 times during his presidency.

4. You are going to have to do a complete reversal of your viewpoints on IMMIGRATION and AMNESTY

Who can forget that Reagan granted amnesty to aliens as president, giving citizenship to over three million illegals living in the USA with the stroke of a pen, a position antithetical to current GOP ideology.

The law granted amnesty to nearly 3 million illegal immigrants, yet was largely considered unsuccessful because the strict sanctions on employers were stripped out of the bill for passage.”

In his farewell address as president, Reagan envisioned America as a city on a hill: “And if there had to be city walls,” he said. “The walls had doors and the doors were open to anyone with the will and the heart to get here.” Strong words from the idol of those who now want to build even taller, electrified walls.

BONUS: Here are a few other areas that will require adjustment, such as EQUAL RIGHTS for the LGBT COMMUNITY. You will have to become PRO-CHOICE, support EXPANSION OF GOVERNMENT, and OF COURSE — you are going to have to START SUPPORTING OBAMACARE.

CONCLUSION: And here are a few concluding thoughts for you, Mr. Cruz, as you embark on your journey of change and self-discovery

“If you look at my father and you just knew him as governor — raised taxes, signed an abortion bill, no-fault divorce, and a few other things — today, the argument against him would come from the right, not from the left.”

Dana Milbank writes of the Tea Party and Reagan for the Washington Post on July 19, 2011:

Nobody knows what Reagan, who died in 2004, would make of the current fight over the debt limit. But 100 years after Reagan’s birth, it’s clear that the Tea Party Republicans have little regard for the policies of the president they claim to venerate.

Writing for Washington Monthly the next day, Steve Brenen summarized the Tea Party’s relationship with Reagan. He writes that the Tea Party agenda

[W]ould have made Reagan’s entire agenda impossible, including the military buildup that conservatives credit with winning the Cold War.

I continue to find this fascinating because of the striking disconnect between Republicans’ principles and their understanding of history. On the one hand, Republicans have a religious-like reverence for “Ronaldus Magnus”; on the other, they have no use for his approach to governance.

It’s comparable to evangelical Christians holding out Jesus as their model for salvation and perfection, only to ignore Jesus’ commitment to protecting the poor and less fortunate.

Brenen goes on to note that “it’s time the mainstream starts to realize that this is no longer the party of Reagan.”

The evidence has become overwhelming. Two weeks ago, a House Republican went so far as to dismiss Reagan as a “moderate, former liberal” who “would never be elected today.” Mike Huckabee said two months ago, “Ronald Reagan would have a very difficult, if not impossible, time being nominated in this atmosphere of the Republican Party.” Sen. Lindsey Graham (R-S.C.) had a nearly identical take last year, arguing Reagan “would have a hard time getting elected as a Republican today.”

I agree, but shouldn’t that tell the political world something about the radicalism of today’s GOP? What should Republicans take away from the fact that, by 2011 standards, their party would dismiss their demigod as a tax-raising, amnesty-loving, pro-bailout, cut-and-run, big-government Democrat?