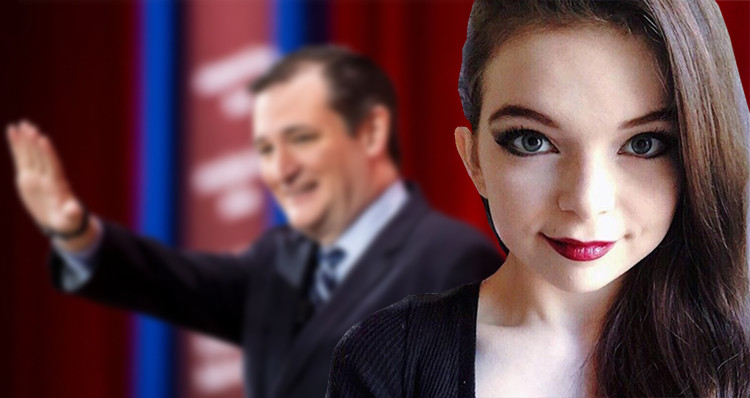 Your latest attempts to woo women voters have made it impossible for me to hold my feelings for you in any longer. Every time you speak, every time I see your face on television, I get a feeling in the pit of my stomach. When, in Wisconsin, you declared that, “Strong women in the United States can accomplish anything,” all the memories I have of you came flooding back, and I realized I just can’t fight it anymore. I have to tell you how I feel.

The foundation of a good relationship is trust, isn’t it, Rafael? When you called equal pay a “trial lawyer bonanza,” that showed me I can trust you to know just how many of your friends are prepared to ignore equal pay legislation to the point that you think women will have to file lawsuits to be paid fairly and that you’re the kind of guy who can keep lots of dirty little secrets between us, like salary information. It’s so endearing that you don’t want me “distracted” from “more important issues.” All this fighting for equal pay could take away from the time I spend doing my nails while I think about whether or not I could run my fingers through your hair with all that product you put in it.

When you said that you know how to put 50 cents in the condom machine and “voila,” that was oh so arousing. We could take long walks on the beach while you try to explain to me how birth control pills are abortion inducing drugs. Actually, considering there are no facts to back up that argument, they’d probably be very short walks, but I digress. Not just any man would be willing to go as far as to shut down the federal government over my access to affordable birth control. That’s devotion right there.

The past relationships you’ve had with women show just how good you are at sweeping us under the rug off our feet. Between 100,000 and 240,000 of women in Texas have attempted to end a pregnancy on their own because they don’t have access to affordable clinics. I guess a little distance in a relationship doesn’t bother you where women are concerned. But I also know you’re capable of having closer relationships like the one you have with Gordon Klingenschmitt. Hanging with your squad means I’ll be safe from the demonic possession that causes people to catch the gay and have shmershmortions.

While demonic possession is something I should maybe worry more about, the fact that I have a 1 in 5 chance of being raped is something I’m more concerned with. The fact that you would want me to have no choice but to carry the baby of a rapist and give birth to it is quite a demonstration of your warmth and understanding.

Oh, Ted. That feeling I get in the pit of my stomach whenever I see you grows stronger every day. You make me sick. Like you said, “…every issue is a women’s issue,” and on every issue, you’re on the wrong side.  You are right about one thing, though. Strong women in the United States can accomplish anything. That includes making sure you never become President of the United States.