Muslims Contradict All Racists, Pseudo-Christians & Warmongers – With One Act Of Kindness 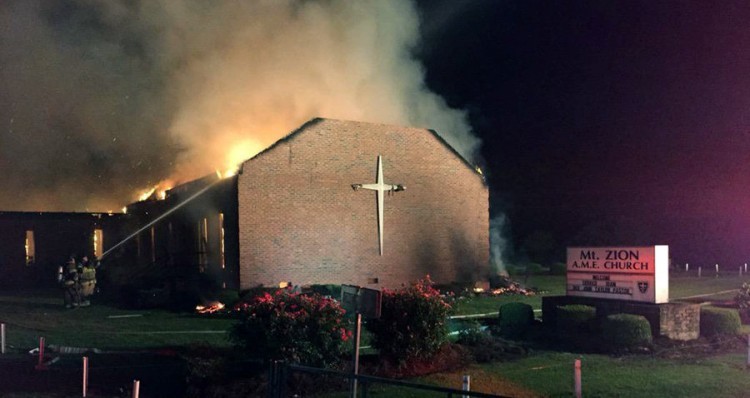 “ALL houses of worship are sanctuaries, a place where all should feel safe, a place we can seek refuge when the world is too much to bear.” -Faatimah Knight/LaunchGood Project Creator

In the wake of increased anti-Muslim rhetoric coming from Republicans during the 2016 campaign, this story from last summer is an important one to retell.

On July 2, 2015, a LaunchGood project was created by Faatimah Knight and several U.S. Muslim groups to help rebuild the black churches that have been burned/damaged/destroyed during the past month. Several of the church attacks have been proven to be acts of arson/racially driven, while other attacks are still under investigation for possible hate crimes.

Church burnings have been a form of violent intimidation used by racists/white supremacists/the KKK to inflict fear into African American communities throughout America, for over a century. The most vicious and horrific church attack, to date, took place in 1963 when four young innocent young black girls were killed in a church bombing by KKK members in Birmingham, Alabama.

The recent church attacks took place within days of the South Carolina massacre, in which nine members of Charleston’s Emanuel AME Church were mercilessly gunned down by a 21-year-old man believed to be acting out of racial hatred.

Until this fundraiser began, resources to rebuild the churches have been minimal. The Muslim community asked for people to unite and help one another, and people around the country responded with $100,470.00 in donations.

“We want to let our African American brothers and sisters know that we stand in solidarity with them during this dark hour.”

Here is a timeline, listed by the LaunchGood project, of eight of the churches damaged/burned/destroyed during a one month period:

So, I’m going to say this – To all the Republican pseudo-Christian extremists who are trying to campaign on sabotaging the Iran Nuclear Peace Agreement signed last year, and who are basing their warmongering agenda on one great lie that says, ‘all Muslims are terrorists’, you need to read this. This is the good upon which America was built. This is the kind of nation Americans want. Do your fucking jobs and protect the people, rather trying to send us into another war by creating hate and division.

The LaunchGood project closed Saturday, July 18, 2015. One can still Sign Here to petition the President to re-convene the National Church Arson Task Force. Here is the petition link: https://www.change.org/…

Special thanks to Renee Lewis with Aljazeera America and Freya Malin.