April 19, 2016 by Kimberley Johnson No Comments 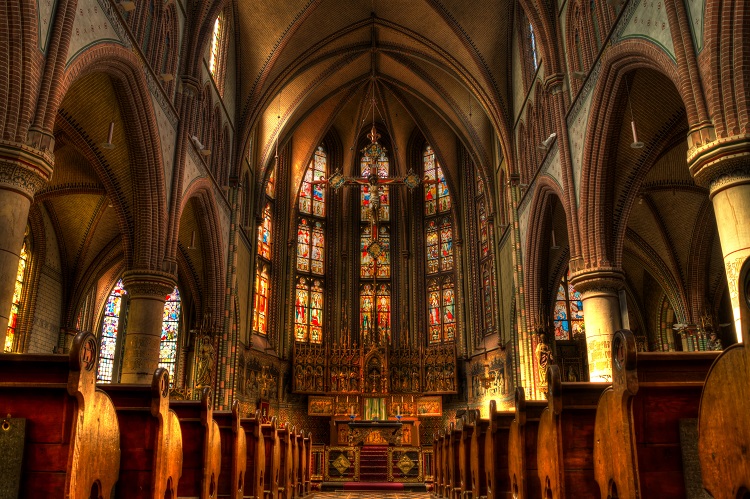 I was raised by a single mom, and neither one of my parents were religious. When I was nine, I spent the summer with my Catholic grandmother, and on Sundays we’d go to church together.

Because I was nine and wasn’t raised by religious parents, church didn’t mean much to me. I remember liking some of the music, and I specifically remember rocking out to “Rock my Soul (in the Bosom of Abraham).” I also remember thinking it was rather scandalous to hear the word “bosom” used in a religious song.

We’d attend church and then we’d walk home. My grandmother was a wonderful, unassuming woman, and she never forced her religious dogma on me. EVER. I had to accompany her to Mass because I wasn’t old enough to stay home alone. I was indifferent about the services and was never interested in learning more.

There was one occasion when my grandma and I had to be uptown early Sunday morning, which meant we attended a different church that particular day. The priest who usually conducted Sunday Mass was sick, and I distinctly recall the priest who filled in for him was off-putting. He sounded angry and cranky. About halfway through the service, he said something I’ll never forget. Because it was so long ago, I don’t remember his words verbatim, but he told the congregation that if we didn’t all pray for the sick priest to get better, we’d go to hell.

I was nine years old and even then I recognized his threat was a crock of shit. My grandma didn’t say much about it but I asked her if she thought it was true, and with a disgusted look on her face, she told me he was wrong to say that. The cranky substitute priest is not necessarily representative of all priests, but his attempt at using guilt and shame really rubbed me the wrong way.

For the record, I’m not an atheist – and I have nothing against atheists. I don’t have anything against anyone who wishes to follow organized religion(s) as long as they don’t try to inject their religious law or morality into my life. I’m just asking that they afford me the same respect I afford them.

As a feminist, organized religion holds no appeal for me. Men are not superior to women. Many religions promote this idea and I reject it. I see it as a problem interfering with social progress. The recent uptick in religious law being used in secular lawmaking as a way to keep patriarchy and certain forms of bigotry alive is particularly disturbing.

My overall outlook regarding faith or lack thereof is that it’s a personal and private journey, yet religion – specifically Christianity – keeps popping up in places it doesn’t belong. The First Amendment to the U.S. Constitution is very clear and reads in part, “Congress shall make no law respecting an establishment of religion, or prohibiting the free exercise thereof . . .”

Evangelical legislators keep pushing their religious agenda in the form of discriminatory laws and calling it “religious freedom.” The good news is that these laws are shot down for being unconstitutional. The bad news is that instead of making progress, the legal battles are a waste of time, taxpayer money and energy. It seems we hear about a new discriminatory law every day. Christians don’t want to bake cakes for gay couples. Christians don’t want the folks in the trans community to use bathrooms representative of their identified gender. Christians don’t want women to get birth control via a third-party insurance provider, and on and on. We hear about the non-existent war on Christmas and the non-existent war on Christians and how people can “pray the gay away.”

It’s all so utterly obscene, while only strengthening my resistance to even considering religion as something that can be positive. Don’t get me wrong: I realize that having faith can be positive for others and it can provide a sense of purpose. It can also serve as a moral compass as well as a sense of comfort for many like my grandmother.

Now I’ll bring up what some people don’t want to hear – and it has to do with the priests who are guilty of molesting children. The fact that the church is not taking proper legal action, covering up the assaults and not making any real effort to right such a horrific wrong is beyond comprehension and is one enormous reason I will never take organized religion seriously.

With my large social media following, I often encounter disgruntled commenters who believe that they can guilt me or others like me into accepting the rules of their faith. It doesn’t work because I have no shred of interest. Using guilt to try and make me go along with their points of view is the same as me trying to convince them the sky is purple and unicorn farts are real. It’s just not going to happen.

When I was a young girl attending church with my grandmother, I could have gone either way. I could have been drawn in, but instead I was turned off.

If religious organizations and those who follow them believe they can continue to push bigotry and use guilt or shame to sell their brand of morality, they will continue to turn away people from all walks of life.