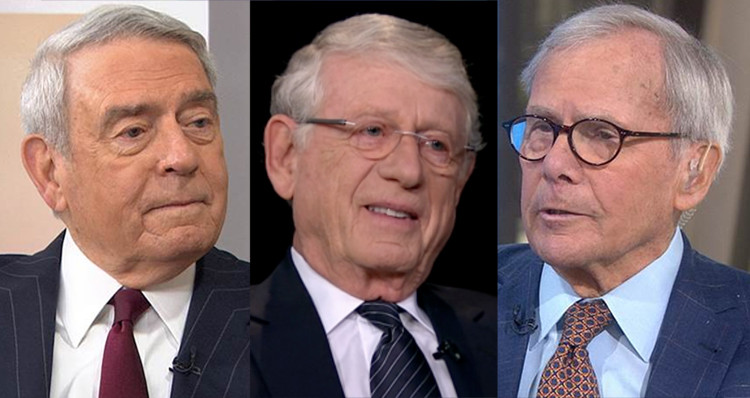 The greatest living news anchors are all united in their criticism of the media and Donald Trump.

Legendary news anchors from all three of the nation’s major networks are united in their criticism of Donald Trump’s presidential campaign and the media’s coverage.

Former ABC News anchor Ted Koppel offered the most detailed criticism of the media and Trump during a March 2016 interview with Fox’s Bill O’Reilly. Koppel placed much of the blame on the fact that networks like Fox have changed the “television landscape of the past 20 years… [taking it] from being objective and dull to subjective and entertaining.”

He went on to state that were he still working he would not “adhere to the new rules of television,” instead he would employ “a little bit of journalism.”

Go into the details of who and what Mr. Trump actually is; what those policies amount to. You remember on Nightline that’s what we used to do… A five or six minute piece that lays out the issues. Then you talk to the candidate and say “why is it we don’t have anything more than just fluff?”

Perhaps Ted Koppel’s closing remark to Bill O’Reilly offers the best insight regarding the extent of the failure of the main stream media’s coverage:

The fact of the matter is – it’s hard to believe these days – but thirty years ago a television network anchor, Walter Cronkite, was the most trusted man in America. There is not a man today, yourself included, on television as an anchor who is trusted by anything approaching a majority of the American people.

Former CBS News anchor Dan Rather warned the media last December not to underestimate Trump, stating that while Trump appears to make dumb statements, he is actually quite smart, and all of the controversial comments Trump makes are “tactical moves” intended to attract the hard-right base. Rather also went on to blast Trump for “confusing the bully pulpit with the BS pulpit” and called him “the best propaganda tool that ISIS has had in a very long time.”

We need to see clearly what’s happening here. Donald Trump, Ted Cruz and the like, they’re confusing the bully pulpit with the BS pulpit. I’m convinced that both Trump and Ted Cruz — not limited to them in the Republican Party — believe that if you can’t convince people with substance, then you blind them with BS. And with Trump, it’s worked fairly well.

Most recently, former NBC News anchor Tom Brokaw blasted the divisive nature of Trump’s campaign at a time when the big message coming from Democrats and Republicans alike is “We want you to get along. We want you to be able to talk together – get things done in Washington.” He went on to state that Trump “has never been held accountable” for his lies.

[Trump has] said some things that were just blatantly not true. He’s never been held accountable for it, so many of them, and the things that he’s said.

Last September Brokaw told a cheering crowd that he would “call in sick” if he had to lead with Trump every day; and in December Brokaw returned to NBC News to present a powerful indictment against Donald Trump’s proposal that calls for a total ban on Muslims entering the United States under any circumstances, comparing his plan to Japanese internment, Nazi Germany, McCarthyism and Jim Crow.

You can watch Ted Koppel’s interview with Bill O’Reilly in the clip, below: