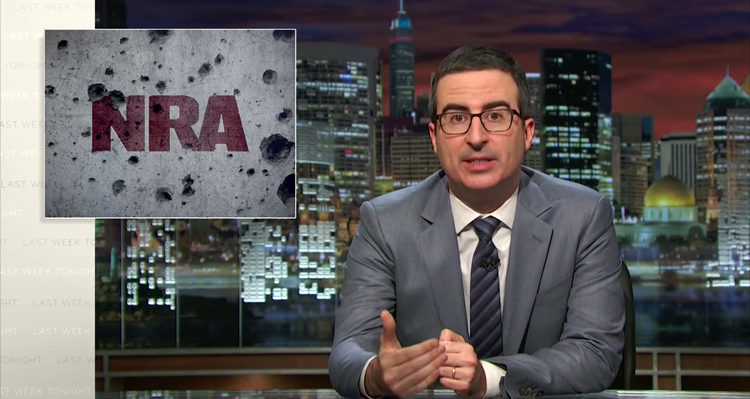 HBO’s John Oliver has a plan to beat the National Rifle Association (NRA) and their efforts to lobby against the interests of the American people.

This Sunday, a week after that deadly attack, Oliver addressed efforts by the NRA to prevent the national Centers for Disease Control and Prevention (CDC) from using any funds to “advocate or promote gun control,” devising a plan to beat the NRA.

As The Daily Beast points out:

Indeed, the NRA has not only managed to coax politicians to embrace soft gun laws—294 congressmen have received a total of $3.7 million from the NRA since 1998—but also prevented the Centers for Disease Control (CDC) from even studying the causes of gun violence. Yes, back in 1997 the Dickey Amendment was added to a congressional bill, and it bars the CDC from any research that would “advocate or promote gun control,” effectively blocking CDC research into gun deaths. As a result, the CDC has not been able to produce a comprehensive study on how to prevent gun violence in 15 years. Since the Dickey Amendment, CDC funding has dropped 96 percent to just $100,000 of last year’s $5.6 billion CDC budget.

The problem, as Oliver explains, is the fact that – since Republicans control the House of Representatives – passage of any gun control legislation is unlikely.

Here we are again after another mass shooting with weak legislation due to failure. And there is clearly a disconnect between public opinion, which favors—to varying degrees—a number of different gun control measures, and any practical action in Washington. And it is pretty clear what is standing between those two things: and it is the National Rifle Association.

“To be fair to the NRA, it’s not surprising they take a hard line on gun control legislation,” he continued, adding: “They’re an advocacy group, it’s what they’re supposed to do. What is shocking is just how successful they’ve been at it.”

And, as Oliver points out – it gets worse.

It’s not just the CDC struggling to collect reliable gun-related information. For decades, the NRA has successfully lobbied to prevent the ATF to have a database that is electronically searchable by name when tracing the origins of firearms,” Oliver continued, adding that when a gun shop goes out of business the only way to trace the ownership of guns is by reviewing oft times illegible paper and microfilm records.

“So how the f— has the NRA managed to accomplish all of this? Because the truth is, they’re not that large an organization. They claim they have a membership of around 5 million, but that is three million fewer members than Planet Fitness—and the members of Planet Fitness have almost no power. Most of them don’t even have the power to go to Planet Fitness,” Oliver continued.

“The real power of the NRA is in its members who are highly motivated and can be mobilized quickly.”

Oliver went on to detail the failure of recent efforts to enact meaningful gun legislation such, as the Manchin-Toomey Amendment that failed to receive enough votes back in 2013 in the wake of the Sandy Hook Elementary School massacre. That bill would have required universal background checks on all commercial sales of guns and  also failed to gain enough votes in 2015 in the wake of the San Bernardino attack.

Speaking of the failure to pass that bill, Oliver continued:

The truth about politics is it’s about showing up. Remember the Manchin-Toomey amendment? Well, a national poll at that time found that 88 percent of people supported universal background checks, and yet Manchin’s office claimed that of the calls they received, they ran 200 to 1 in opposition to the bill, and that’s why it’s actually important to call your congressman.

Continuing that argument, Oliver concluded the segment by laying out a plan to defeat the NRA at their own game by calling on his viewers to contact their local congressmen and congresswomen to demand the repeal of the Dickey Amendment:

Repealing it is not asking much. It’s not gun control! It’s enabling us to have an informed conversation about what that could look like. And if or when a proposal you like is on the table, you’re going to have to make all those calls again, because remember: it doesn’t take much to outnumber the NRA. Planet Fitness members outnumber them. But it’s time for us to learn what those members haven’t: if you’re going to see serious changes, you actually have to show up every fucking day.

You can watch the segment, below: