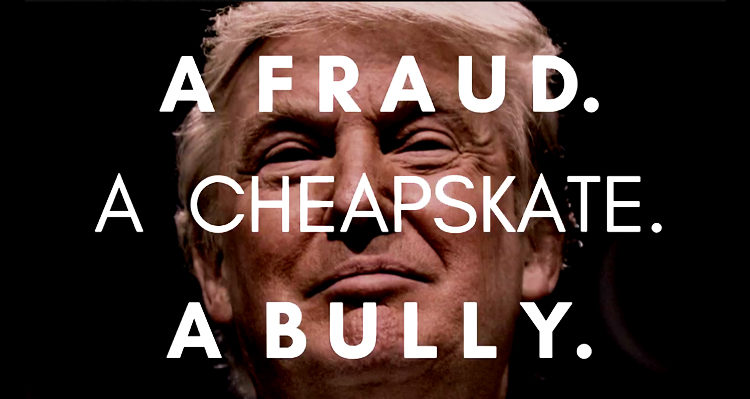 “I have to be honest: It’s hard to talk about Donald Trump. Between his ignorance, racism, sexism, lies—it’s hard to know where to start. But we’ve got to start somewhere and today I want to focus on one lie that helps sum up what Donald J. Trump is all about—his taxes.” ~ Senator Elizabeth Warren

Elizabeth Warren has been working hard to expose Donald Trump for the loser he is.

In March, the Massachusetts Democratic Senator sent out a series of tweets calling Trump a “loser” and “a failed businessman” who inherited a fortune from his father and then maintained it “by cheating people, by defrauding people, and by skipping out on paying his creditors through Chapter 11’’ bankruptcy protection.”

In her latest video from MoveOn, Warren zeros in on the fact that Trump is a tax dodger and points out that he’s the “first presidential nominee in 40 years to refuse to disclose his tax returns.”

She suggests that maybe he’s just a “lousy businessman who doesn’t want you to find out he’s worth a whole lot less than he claims.”

Warren explains that the last time Trump’s taxes were made public, it turned out he paid nothing in federal taxes.

Recognizing that Trump hates to be called out on his bullshit, Warren acknowledges that after he hears about this latest video, he’ll call her more names – because that’s all he has. Her advice is to publicly call him out when he tries to intimidate, threaten and bully – to talk about him and expose him for the fraud he is. She asks everyone to talk with friends and neighbors and even strangers in the checkout line at the grocery store. She suggests that you ask your Republican friends and family why they have to pay taxes but Donald Trump doesn’t.

Trump is a loser, and Warren’s unrelenting desire to prove it is delicious.