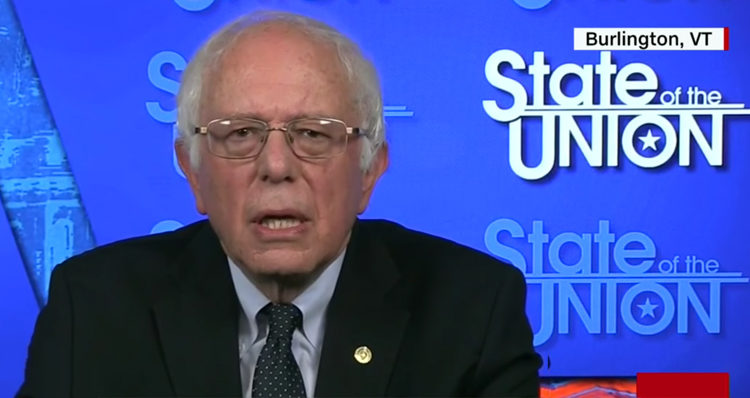 Bernie Sanders was holding nothing back this weekend when it comes to his dislike for Republican nominee Donald Trump.

For the most part, Sanders brushed off the question telling Stephanopoulos that there were not new revelations from the leaks and that he has been calling for Wasserman Schultz to step down for months.

Speaking about Trump, Sanders had the following response:

We do not need a billionaire president who wants to give hundreds of billions of dollars in tax breaks to the top 1 percent, but does not want to raise the minimum wage. We do not need to have a president who insults Mexicans and Latinos and Muslims and women and veterans and African-Americans, we need a president who brings us together, not divides us up.

We don’t need a president like a Trump who doesn’t actually, George, doesn’t even believe in climate change, let alone wants to do anything about it, rejecting science.

So, right now we have got to defeat Trump, we have to elect Hillary Clinton. We have to elect progressive candidates in the house, and in the senate, and school boards, and city councils. And most importantly, we have got to continue the fight for an agenda to create a government that works for all of us, and not just the people on top. And that’s the mission that I will be undertaking.

Asked if he thought there was any chance that some of his supporters would be attracted to Trump, Sanders had the following epic response:

Look, we are 13 million votes. So, I can’t speak for what any one of 13 million people are going to do. But I think the vast majority of our supporters understand that in Donald Trump, and I say this not happily, you have somebody who lies all the time, somebody who wins his campaign just by vicious attacks against his opponents, somebody who has not brought forth any kind of serious agenda to deal with, in fact, the very serious problems facing the middle class and the working class of this country.

Now, why would my supporters be supporting somebody who doesn’t want to raise the federal minimum wage of $7.25 an hour, a starvation wage, doesn’t want to do that. Why would anybody that supports me support a candidate like Trump who wants to throw millions and millions of people off of health insurance? We need to guarantee health care to all people as a right, not throw millions of people off health insurance as Trump wants to do.

So, I think — you know, I can’t speak for 13 million people, but I think most of my supporters understand Trump has got to be defeated. We need to elect as many progressives as possible. And we need to continue the fight to create an agenda which works for working families and not just for wealthy campaign contributors.

You can watch that exchange in the clip, below:

.@BernieSanders: "Most of my supporters understand Trump has got to be defeated" #ThisWeek https://t.co/bCfWE3Rsvt

Sanders’ interview with CNN’s Jake Tapper during Sunday’s State of the Union was much the same with Sanders focusing on Trump while saying little about the Wikileaks disclosure.

I think the focus, though, that I am going to go forward on right now is to make sure that Donald Trump, perhaps the worst Republican candidate in the modern history of this country, somebody by temperament, somebody by ideology must not become president of the United States.

I’m going to do everything I can to defeat him, to elect Hillary Clinton, and to keep focusing, keep focusing on the real issues facing the American people. And that is the decline of the American middle class going on for 40 years, massive levels of income and wealth inequality.

A few moments later, Sanders stressed that “defeating Trump, electing Clinton,” and “electing progressive candidates around this country” was his main focus.

So, my focus right now is defeating Trump, electing Clinton, electing progressive candidates around this country, and focusing on the issues that matter the most to working families.

Tapper and Sanders briefly touched on Senator Tim Kaine, Clinton’s choice for vice president. Asked if he thought Tim Kaine “stands for the opposite” of his “political revolution,” Sanders offered the follow response:

Look, I have known Tim Kaine. Tim is a fellow senator. I have known him for a number of years. Tim is an extremely bright guy, a very nice guy. Are his political views different than mine? Yes, they are. He is more conservative than I am.

But compared to Donald Trump, a guy who rejects science, doesn’t even believe that climate change is real, let alone that we have to take bold action to transform our energy system, a Donald Trump who wants to give hundreds of billions of dollars in tax breaks to the top two-tenths of 1 percent, a Donald Trump who goes around the country insulting Mexicans and Latinos and Muslims and women, veterans and African-Americans, trust me, on — on his worst, worst, worst day, Tim Kaine is 100 times better than Donald Trump will ever be.

Asked about his message to disappointed supporters, Sanders again turned his attention to Trump:

This is my message, is that we have got to stay focused. And the immediate focus has got to be that a disastrous candidate like Donald Trump cannot be elected.

My second message is that we continue the political revolution and fight for a government that represents all of us, and not just the 1 percent, fight to break up the banks on Wall Street, fight for a Medicare-for-all single-payer system, fight to rebuild our infrastructure and create millions of decent jobs, fight for real criminal justice and immigration reform.

You can watch Sanders’ interview with CNN in the video, below, cued up to the beginning of his comments about Donald Trump: