Important Strategy Questions For The Bernie Or Bust Crowd

August 2, 2016 by Kimberley Johnson No Comments 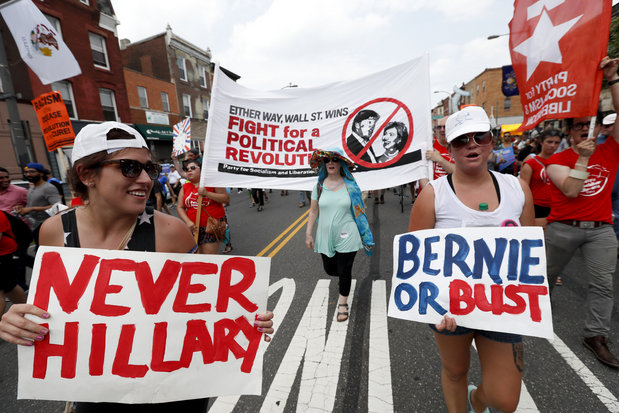 A list of important questions for the Bernie or Bust crowd.

I voted for Bernie Sanders in the primary. I wrote about why I supported him in the Huffington Post, on this blog site and on my Facebook page. I regularly sent money to the Sanders campaign – something I’ve never done before. I cried more than once during the bitter primary season, and I argued with people I love. Suffice it to say, it was a difficult time for me.

That said, the reality is that Hillary Clinton is the Democratic presidential nominee, and I will be voting for her – with confidence – in the general.

Some voters are upset over the outcome of the primaries – they say they will write Sanders in, even though several states do not have a write-in option. They’ve called Sanders a sellout for endorsing Clinton at the Democratic National Convention.

To those people, I have a list of questions to ask. I posted them to my Facebook page last week, and no one was able to answer any of these questions. Not one. I was scolded by a few people who didn’t like that I dared to ask for a concrete plan of action – but none of them were able provide me or my FB friends with any solid answers.

I’d really like people for the Bernie or Bust crowd to put aside emotions and to answer these questions:

How organized are you? Are there offices in states (which states?) set up all over the country where people are organizing and communicating plans of action with each other?

Are you funded? If so, what is your funding mechanism, and how much capital do you have at your disposal?

Does your movement have leaders? Who are they, and what are their credentials?

If Trump is elected:

How will you re-organize the Democratic Party? Be specific, please. How will you get rid of the Democrats you view as the problem? Is there an official list? And how will they be replaced?

What is your plan on how to deal with a Supreme Court that is stacked with uber conservative Justices who will overturn the Affordable Care Act and Roe v. Wade (a woman’s right to choose)?

What is your plan to help the millions of citizens who will lose their healthcare? How will you help them get affordable healthcare? Be specific.

How will you keep Social Security in place when the GOP moves to privatize it?

How will you convince Congress and The Supreme Court to expand voting rights in a Trump administration?

How will you keep air and water clean when the GOP gets rid of the Environmental Protection Agency? (And I am aware of Clinton’s record on fracking. How will you get a Trump administration to stop fracking?)

How will you stop an economic depression if Trump is elected? The world will panic and the global economy will go into a free fall like we’ve never seen. How will you counter that?

These are only a few of the questions that I’d like answered. I am not interested in hearing about how pissed you are at Hillary or the DNC; we’re all clear about that. We all know why you’re angry, but what constructive measures are you going to take?

What is your organized, strategic plan?