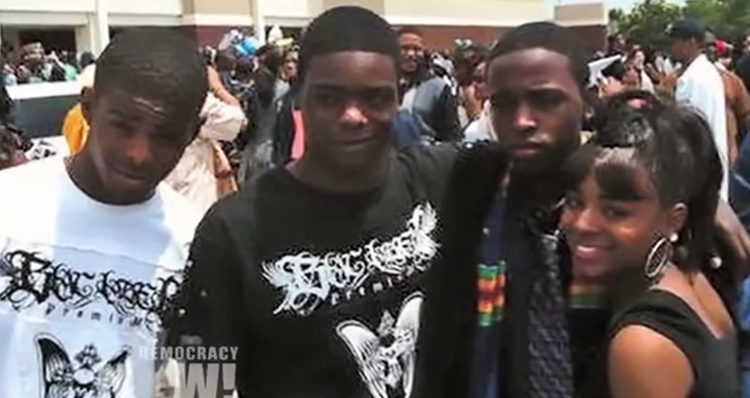 The shocking story of how a Chicago cop killed a teenager and then locked up his best friend for murder.

A Chicago man received a sentence of 32-years for robbery and murder in a case involving an officer-involved fatal shooting.

The Chicago Sun Times reported last year that: “A Cook County jury convicted Tevin Louis, 22, of two counts of murder and two counts of armed robbery following a November 2014 trial, according to court records. Judge Thomas Byrne sentenced him Wednesday to a total of 32 years.”

“Louis was arrested after he and an alleged accomplice — 19-year-old Marquise Sampson — robbed two King Gyro restaurant employees at gunpoint on July 8, 2012, in the 7900 block of South Vincennes, authorities said at the time.”

Democracy Now elaborated on the story this week, reporting that “After reportedly making off with about $1,200, the two ran in different directions. Sampson crossed paths with an officer, who gave chase and ultimately opened fire, killing the teenager. Louis arrived at the scene where his friend was shot, and attempted to cross the police line.”

He was arrested for disorderly conduct. But in a shocking turn, Louis was eventually charged with first-degree murder in the death of his best friend, even though it was the officer who killed Sampson. Louis was found guilty. He is now serving a 32-year sentence for armed robbery and a 20-year sentence for murder. Louis is one of 10 people with similar cases exposed in the Chicago Reader’s new article headlined “Charged with Murder, But They Didn’t Kill Anyone—Police Did.”

The fact that veteran police officer Antonio Dicarlo fired the fatal shots is acknowledged in Chicago Police Department reports according to the Chicago Reader. However, “it’s Louis whom the Cook County criminal justice system has held responsible.”

Under a controversial legal doctrine known as the “felony murder rule,” the teen’s prosecution relied on a theory of accountability enshrined in Illinois’s criminal code: that while committing a felony, a person can set in motion a chain of events that lead to the death of another person.

Even more puzzling, the Chicago Reader reports that:

[W]hile Louis is serving time for his friend’s murder, the officer who actually pulled the trigger has been commended for his actions. For fatally shooting Sampson, Dicarlo received a 2013 Superintendent’s Award for Valor, which honors “an act of outstanding bravery or heroism,” according to CPD. Mayor Rahm Emanuel presided over the ceremony.

Sarah Macaraeg, one of the authors of the Chicago Reader article, explains in the Democracy Now interview below that there are questions surrounding the legitimacy of the investigation by the Independent Police Review Authority, which found the shooting justified.

Macaraeg states that “when you read their summary of their investigation, so much of it relies on simply the officer’s account that Marquise Sampson pulled his weapon on him.” However, when she obtained video footage of the incident pursuant to the Freedom of Information Act,  she states that “The video is highly obscured. There is no situation in which it’s clear that Marquise Sampson ever pulled his weapon on Dicarlo.”

Even more troubling is the history of Officer Dicarlo, who fired the fatal bullet. As Macaraeg explains:

Dicarlo’s own history, you know, is one of which it’s very important to take note. The officer has more than 20 misconduct complaints on his record, one of which involves the improper use of a weapon. And really, the whole finding of the shooting being justified was very much reliant on just the officer’s account. And also, you know, the evidence that’s cited in the video, even though the shooting itself is obscured, I mean, the evidence that’s cited by IPRA is just simply the fact that Marquise Sampson was allegedly holding his waistband. So, the finding itself is very thin.

That is what we heard from experts about this, that it’s really a red flag for misconduct when you see civilians or co-arrestee suspects being charged with a killing that they didn’t commit, but that police did. It’s often a red flag for misconduct. And, you know, here in Chicago, we have a problem with that, as we see nationwide, of course, but we know that 97 percent of Chicago police misconduct complaints go undisciplined. And so, there really is a problem of immunity, where police officers face little discipline, and it’s pretty easy for them to shift blame.

You can watch the interview with Amy Goodman and Alison Flowers, a journalist with the Chicago-based Invisible Institute, and Sarah Macaraeg, an independent journalist and fellow with the International Center for Journalists, in the clip below.