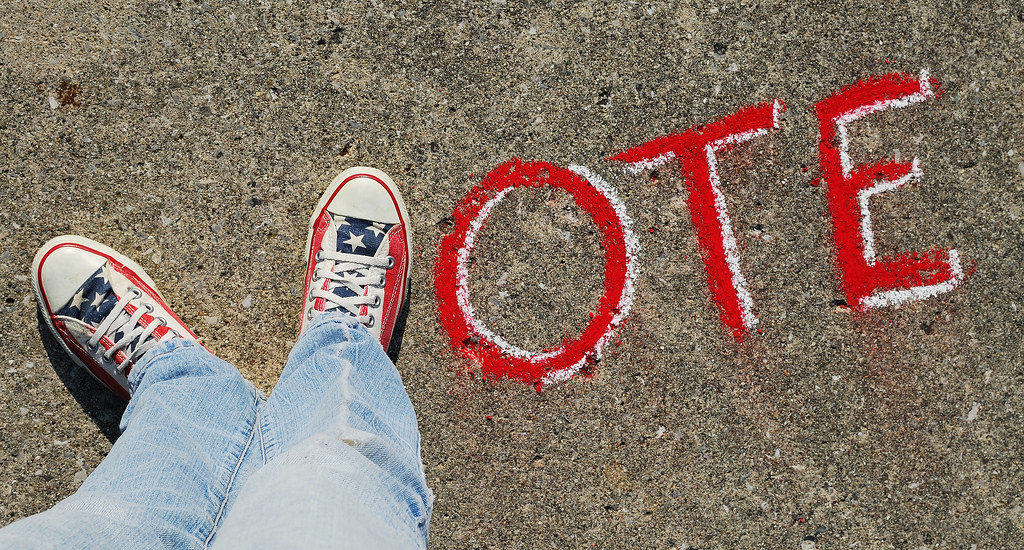 This may be the most important election of the century and it is imperative that everyone vote.

Nate Silver’s highly esteemed website, FiveThirtyEight, currently gives Trump’s campaign a 14.7 percent chance of winning if the election were held today. [The Polls Only prediction gives him a slightly higher chance – 15.1 percent, and Polls-Plus, which factors in the economy and historic data, gives him 25.1 percent.]

It is increasingly important that as many liberals and progressives as possible get out the vote this November. We need all the sane, fact-respecting, science-believing people to rise up and have their voice heard – for voting is one of the strongest tools – indeed, the only tool for many of us – to influence government.

That being said, below are a few reasons why it is important to vote.

1. When Democrats vote, Democrats win. It’s as simple as that. And you can feel free to substitute “Democrats” with “liberals” or “progressives.”

2. The Margin of the victory can be important – The debacle in Florida that followed the 2000 presidential election is still fresh in many people’s minds; and George W. Bush never would have been able to steal that state were if not for the small margin. Bush ultimately won the state by a margin of 537 votes when the U.S. Supreme Court halted a recount proposed by the Florida Supreme Court in the controversial case George W. Bush, et al., Petitioners v. Albert Gore, Jr., et al., 531 U.S. 98 (2000). In turn, that gave Bush a majority of Electoral College votes and victory in the presidential campaign.

3. The stakes are too high in this election to be ignored. Donald Trump presents an existential threat to the very foundations of this country, our core beliefs, our founding principals. America was a nation rooted in the belief that “all men are created equal,” a country that secured freedom of expression, freedom of religion and the separation of church and state in its Constitution.

Yet, we have a presidential candidate campaigning on the idea of building a wall to keep out immigrants, banning Muslim immigration, creating a national registry of Muslims and mosques. There has even been talk of badges for Muslims.[1] Trump has the support of the American Nazi Party and other white supremacist groups, like the Traditionalist Worker Party. David Duke, a former member of the American Nazi party and former Grand Wizard of the Ku Klux Klan has urged his supporters to vote for Trump, telling them that voting for anyone besides Donald Trump “is really treason to your heritage.”

Trump talks of Second Amendment solutions were he to lose the election…. The list goes on and on… We are literally facing a war between neoliberalism and fascism with this election and the election needs to do more than hand a victory to Hillary Clinton. The vote needs to send a clear and resounding message to the the Donald Trumps of the world that we overwhelmingly reject his message of division, bigotry and hatred. Otherwise, we run the risk of his son or some other bigot rising from the ashes of his campaign to try again next time around – but this time learning from Trump’s mistakes… and potentially posing an even greater risk to the America I know and love.

All that being said, I will only briefly cover the remaining portion of the list.

4. Down ballet elections are critical. It is not enough to get Clinton in office. Democrats need to control both the House of Representatives and the Senate to support her presidency.

5. Local elections are critical. The federal government is not shutting down abortion centers, blocking people from exercising the right to vote, passing “stand your ground laws,” allowing ordinary citizens to parade loaded assault rifles in airports, schools, churches and while drinking in bars….

6. Voting is an effective way to send a message to elected officials that we are holding them accountable.

7. Voting is one of the strongest tools citizens have to influence government.

8. You forfeit your right to complain if you do not vote.

9. Voting is a way to honor our history and to show our respect for those who bravely gave their lives for our right to vote.

Footnote 1: It is worth noting that founding father John Adams signed the 1797 Treaty with Tripoli, which reassured that Muslim nation that “the Government of the United States of America is not, in any sense, founded on the Christian religion.”