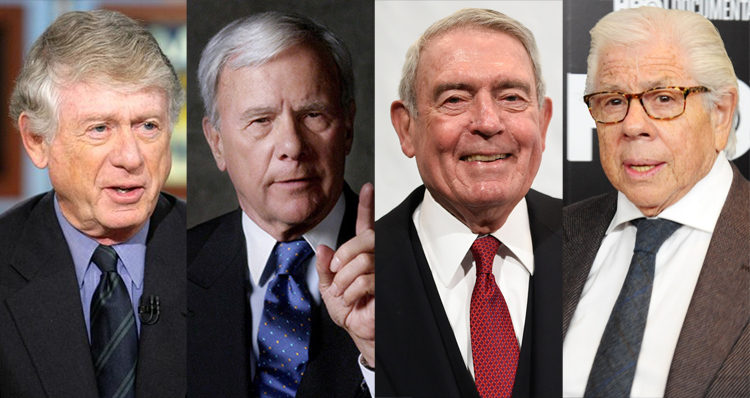 These news legends tried to warn the media about their failure to hold Donald Trump accountable for his many lies.

Some of the greatest living journalists are united in their criticism of Donald Trump’s presidential campaign and the media’s coverage of the 2016 election.

These well-known news anchors from ABC, CBS and NBC were speaking out in the months and weeks leading up to the election, trying to warn the media about Trump.

Ted Koppel, “best known as the anchor for Nightline from the program’s inception in 1980 until 2005,” offered detailed criticism during a March 2016 interview with Fox News host Bill O’Reilly.

Koppel blasted networks like Fox News for changing “the television landscape of the past 20 years [taking it] from being objective and dull to subjective and entertaining.”

Koppel added that if he was still reporting the news, he would not “adhere to the new rules of television,” rather he would use real “journalism.”

“Go into the details of who and what Mr. Trump actually is; what those policies amount to,” he continued. “You remember on Nightline that’s what we used to do… A five or six minute piece that lays out the issues. Then you talk to the candidate and say ‘why is it we don’t have anything more than just fluff?’”

Koppel closed the interview, remarking on the lack of trust the public places on the media today. “The fact of the matter is – it’s hard to believe these days – but thirty years ago a television network anchor, Walter Cronkite, was the most trusted man in America. There is not a man today, yourself included, on television as an anchor who is trusted by anything approaching a majority of the American people.”

Dan Rather, “best known for his 24-year tenure as anchor of ‘CBS Evening News,'” warned the media not to underestimate Donald Trump last December, warning that although he appears to make dumb statements he is actually quite intelligent, that all his controversial remarks are “tactical moves” designed to attract the hard-right base. Rather also remarked that Trump was “confusing the bully pulpit with the BS pulpit.”

Last September, Rather published – perhaps – his harshest criticism of the media of the campaign cycle. Warning that Trump “cynically plays the press corps’ deep desire for fairness to his undeserved benefit,” Rather wrote that “Fear, combined with the lure of ratings, views, clicks and profits, have hypnotized too much of the press into inaction and false equivalency for far too long.”

“Trump’s relationship with the press is at the heart of so much that is troubling about his candidacy,” he wrote. “[T]oo much of the press has been cowed into inaction. This is a man who can be fact-checked into obscurity by any second grader with an Internet connection.”

Tom Brokaw, anchor of NBC Nightly News from 1982 to 2004, blasted the divisive nature of Trump’s campaign in May 2016. He went on to criticize the media coverage of the campaign, stating that Trump “has never been held accountable” for his many lies.

Trump has “said some things that were just blatantly not true,” he stated, adding that “He’s never been held accountable for it, so many of them, and the things that he’s said.”

Brokaw’s criticism of the Trump campaign heightened last September when Brokaw told a cheering crowd that he would “call in sick” if he was still on the air and had to lead with a story about Trump every day.

Then in December Brokaw returned to NBC News where he presented a statement comparing Donald Trump’s call for a total ban on Muslims entering the United States under any circumstances, to Japanese internment in the United States during WWII,  Nazi Germany, McCarthyism, and Jim Crow laws.

Carl Bernstein tore into the media during a September interview on CNN’s “Reliable Sources.”

Bernstein, “an investigative reporter who along with Bob Woodward is known for breaking the 1970s Watergate scandal which led to the resignation of President Richard Nixon,” told host Brian Stelter that he was concerned with the lack of adequate coverage of “Trump’s life and record.”

Bernstein stated that while the media has “been terrific” at giving “equal time to debate panels,” they have “been positively awful in terms of reporting in a coherent way the biggest story of this campaign, the real existing life and record of Donald Trump.”

Bernstein went on to state that the media should be dedicating “an hour, two hours a night of real biography, running it over and over of what Trump’s life and record have been about because they’re at absolute odds with the mythical and lying story that he has told us.”

“He’s a con man,” Bernstein added. “It’s been established. And also he has presided over a cover up of his own life. And we have allowed it in cable news and network news particularly.”