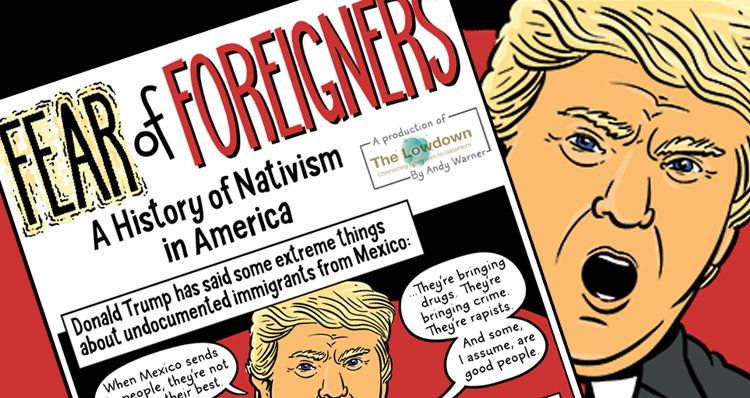 KQED, a San Francisco Bay Area NPR affiliate, published an anti-Trump comic book this week casting Republican nominee Donald Trump as a part of the ‘History of Nativism in America.” (Nativism is defined by Merriam-Webster as “a policy of favoring native inhabitants as opposed to immigrants.”)

The comic book, in an online slideshow format or available to download, is part of “The Lowdown,” KQED’s News Education Project. The project is a collaborative effort between the station’s Education and News departments and is “specifically geared towards high school educators as a resource for teaching with the news and creatively integrating current events into core curriculum to encourage student civic engagement.”

Illustrated by Andy Warner, the twelve panel slideshow begins with two panels depicting Trump, the first panel depicting some of the “extreme things” he has said about “undocumented immigrants from Mexico,” and the second is about his call for a “total and complete shutdown of Muslims entering the United States.”

The comic goes on to explain that: “Some Americans find his rhetoric alarming, but it follows a long tradition of anti-immigrant public discourse.”

Noting that “Even though immigration is a big part of almost every American family’s story,” subsequent panels detail America’s history of resistance to immigration beginning with concerns expressed by founder Benjamin Franklin and tracing the “Know Nothings” of the 1850s, the development of the Ku Klux Klan, the anti-Semitic movement, outrage at low-wage workers from Mexico, the Japanese internment camps of WWII, and California’s Proposition 187 – “an effort to deny most state services, including public education, to undocumented workers.” The comic goes on to explain that, ultimately, “a federal court ruled the measure unconstitutional and it never went into effect.”

The comic concludes by stating that “if history is any guide, it’s worth remembering that the anti-immigrant fervor of the moment usually fades. And, more often than not, those targeted newcomers are eventually woven into the patchwork quilt of American Society.”

Sources for the comic slideshow include: David Harry Bennett’s book The Party Of Fear: The American Far Right from Nativism to the Militia Movement, an article by The Economist entitled This Land is our Land, the U.S. State Department Office of the Historian, and Peter Schrag’s book Not Fit for Our Society: Nativism and Immigration.