Michelle Obama: Trump Threatening The ‘Very Idea of America Itself’ 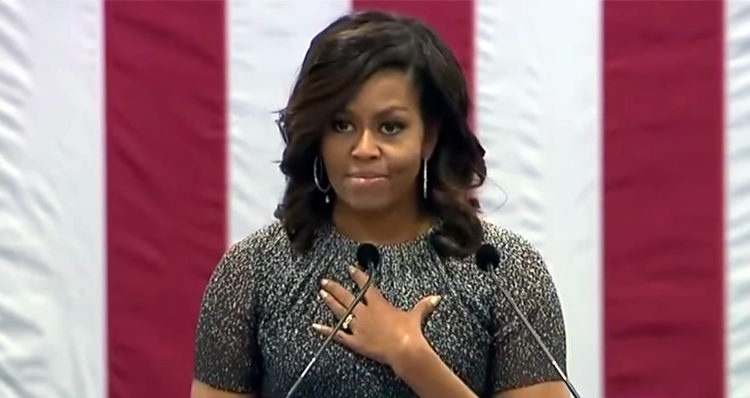 Michelle Obama gives a powerful speech denouncing Donald Trump and his disgusting comments that threaten the very idea of America.

First Lady Michelle Obama has become and incredibly powerful presence on the campaign trail for Hillary Clinton and Thursday was no exception when she told a Phoenix crowd that Donald Trump’s debate-night refusal to say whether he would accept the results of the election was “threatening the very idea of America itself.“

The First Lady spoke to the crowd of around 7,000 about the need to vote, saying that “if Hillary does not win this election, that will be on us.”

She added that Trump’s strategy is “to make this election so dirty and so ugly that we just turn off the TV and say, we just don’t want any part of it.”

“So when you hear folks talking about a global conspiracy and saying this election is ‘rigged’ — understand that they are trying to get you to stay home,” she continued.

“Our democracy is revered around the world,” Mrs. Obama continued, adding that “free elections are the best way on Earth to choose our leader.”

“This is how we elected John F. Kennedy; Ronald Reagan; two George Bushes; Bill Clinton; and Barack Obama,” she told the cheering crowd. “It has worked for decades.”

Speaking of Trump’s refusal to say whether he would accept the outcome of the the election, she warned the crowd that “when a presidential candidate threatens to ignore our voices and reject the outcome of this election, he is threatening the very idea of America itself — and we cannot stand for that.”

“You do not keep American democracy ‘in suspense.’  Because look, too many people have marched and protested and fought and died for this democracy.   Please.”