October 4, 2016 by Kimberley Johnson No Comments 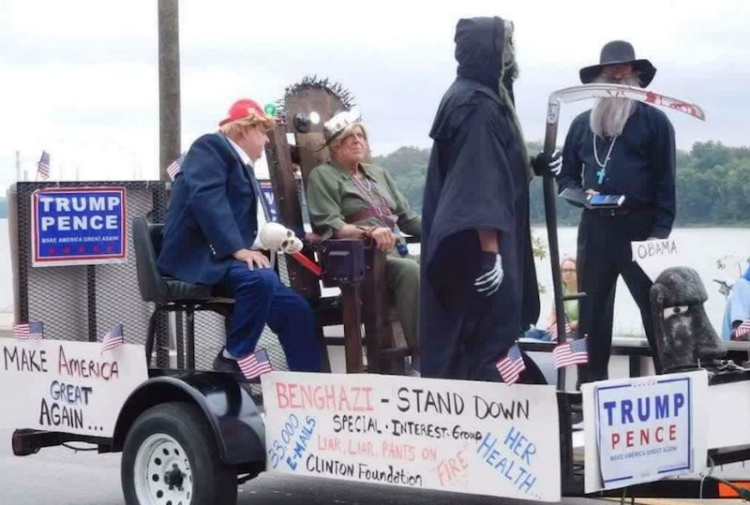 Every autumn the streets of Indiana fill up with food vendors, carnival rides, live music, and family-friendly fun for all at the Aurora Farmers Fair, put on by the Lion’s Club. There’s an annual parade held on Second Street, and this year one of the floats spurred controversy – for good reason.

The offensive float in question was created by Frank Linkmeyer, and the scene portrayed likenesses of both presidential candidates: Democratic nominee Hillary Clinton and the GOP nominee, Donald Trump. Trump appears to be in charge of an electric chair – where Clinton is strapped in. In case this optic wasn’t clear enough, the float also included death himself standing guard, wearing the requisite black robe and holding a scythe. There is a fourth character wearing all black with a large cross necklace. Not sure if it’s supposed to be Duck Dynasty’s Phil Robertson or some other fictional character. The float also featured an Easter Island head in black face with a sign that identified it as President Obama.

Signs were plastered all over the float, and the most notable one that was hand-written aimed at Clinton and included, “Benghazi,” “Her health,” “33,000 e-mails,” and “Liar liar Pants On Fire.”

Organizers of the fair issued a statement after many attendees complained about the shocking and violent imagery depicting the murder of the first woman to be nominated by a major party – in a parade where children were also in attendance.

“The Aurora Lions Club regrets the display which was part of the Aurora Farmers Fair parade on October 1st which offended some viewers. The parade is a public venue which does not reflect the views of the Aurora Lions Club. As a member of a worldwide service organization, we are proud and standby our record of service to this community. We appreciate the high levels of support and the esteem given to us by our citizens. We will continue to do our best to live up to their standards. We hope the political circus of this year’s election stays with the national media.”

Linkmeyer said, “It’s all in fun. Laughter is the best medicine in life and this country needs more laughter — and the people that are offended by it, I’m sorry. Don’t come to the parade next time.”

Yes, because suggesting that executing a presidential candidate is HILARIOUS! Duh!

This is exactly why Clinton referred to Trump supporters as deplorable. This kind of behavior is a direct result of Donald Trump’s extreme, sexist, white supremacist messaging, and his supporters are becoming more and more bold in their hateful rhetoric and actions.

So much for moral high ground and family values.