California Prepares For Political War – ‘We Will Lead The Resistance’ – Video 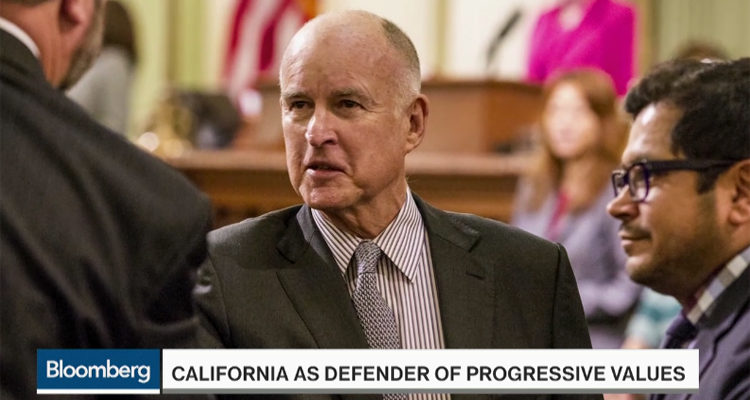 “We are not going to allow one election to reverse generations of progress…. While Donald Trump may have won the presidency, he hasn’t changed our values.”

Donald Trump will begin his presidency in January with control over both chambers of Congress by his party. However, as The Guardian reports, although “this one-party control over Washington hands Trump enviable power” he should not expect “plain sailing” as the Democrats are expected to fight back using the Senate filibuster.

“We are going to see the use of the filibuster by Democrats to a degree that’s unprecedented,” said Ross Baker, professor of political science at Rutgers University. “Republicans didn’t offer Obama a honeymoon in 2009 and nor will the Democrats for Trump.”

And it’s not just in Washington where Donald Trump can expect to find trouble moving forwards with his agenda. Immediately after the election California Senate President pro Tempore Kevin de León (D-Los Angeles) and California Assembly Speaker Anthony Rendon (D-Paramount) released a “Joint Statement from California Legislative Leaders on Result of Presidential Election” detailing their plan to “lead the resistance” to any efforts by President-elect Trump to “reverse generations of progress.”

“Today, we woke up feeling like strangers in a foreign land, because yesterday Americans expressed their views on a pluralistic and democratic society that are clearly inconsistent with the values of the people of California,” they began. “While Donald Trump may have won the presidency, he hasn’t changed our values. America is greater than any one man or party. We will not be dragged back into the past. We will lead the resistance to any effort that would shred our social fabric or our Constitution.”

Stating that “We are not going to allow one election to reverse generations of progress at the height of our historic diversity, scientific advancement, economic output, and sense of global responsibility,” Sen. Leon and Speaker Rendon vow that they will “maximize the time during the presidential transition to defend our accomplishments using every tool at our disposal” by “reaching out to federal, state and local officials to evaluate how a Trump Presidency will potentially impact federal funding of ongoing state programs, job-creating investments reliant on foreign trade, and federal enforcement of laws affecting the rights of people living in our state.”

And, indeed, California Democrats have both the political and financial might to “lead the resistance.”

As Bloomberg reports, “Democrats have dominated all branches of California’s government since 2011, when Jerry Brown succeeded Arnold Schwarzenegger as governor. With the largest economy in the U.S. and the sixth-largest in the world, the state enjoys greater independence from Washington than most.”

Sen. Leon and Speaker Rendon conclude, by stating: “California was not a part of this nation when its history began, but we are clearly now the keeper of its future.”