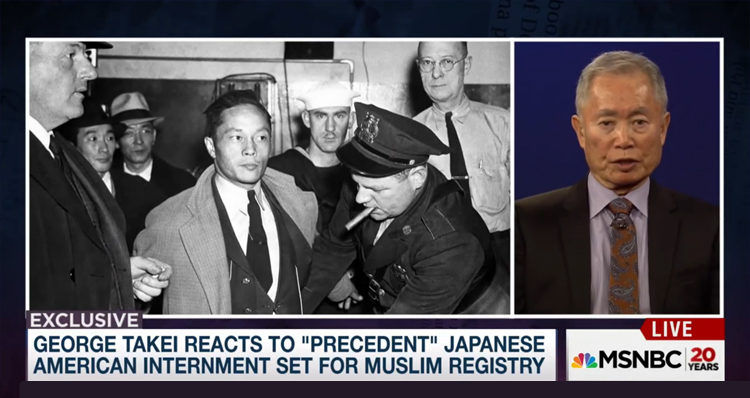 Beloved Star Trek actor and activist George Takei is speaking out against a Muslim registry, calling it a prelude to internment.

Actor and activist George Takei is speaking out two days after Trump adviser Kris Kobach suggested that there should be a national registry for Muslims and a day after Trump surrogate Carl Higbie told Fox News host Megyn Kelly that the Muslim registry that President-elect Donald Trump is proposing has precedent in the Japanese internment camps of World War II.

The Trump campaign tried to back away from those remarks with Trump spokesman Jason Miller stating that the suggestion of Trump wanting a registry was “completely false.”

“[Trump] never advocated for any registry or system that tracks individuals based on their religion.”

Takei, who was forced to live in a Japanese internment camp in Arkansas as a child, spoke with MSNBC‘s Lawrence O’Donnell Thursday night about those remarks, warning that “registration of any group of people, and certainly registration of Muslims, is a prelude to internment.”

“A registry is this simple categorization of a people of one faith. In our case, it was people of one ancestry,” he continued, adding: “We were American citizens, and yet, because we looked like the enemy, we were treated like the enemy and imprisoned. This is what’s going to happen with a Muslim registry, and we as Americans will not tolerate that again.”

Takei also spoke out in a Thursday interview with The Hollywood Reporter, stating that: “The Japanese-American internment was an egregious violation of our national values and principles, a terrible event for which Congress apologized in 1988. To invoke that dark chapter as a precedent for any action against any minorities today is a morally bankrupt and dangerous step, completely out-of-bounds with contemporary notions of civil and human rights.”

He also warned about the dangers of history repeating itself. “It is more important than ever that the story of the internment be told and heard. We must remain vigilant and mindful of our past mistakes, so that history does not repeat itself. Trump’s rhetoric and plans to profile Muslims indicate that he has not learned the folly of the internment, nor the forces of fear and prejudice that propelled it.”

You can watch Takei speaking with O’Donnell in the clip, below: