December 8, 2016 by Samuel Warde No Comments 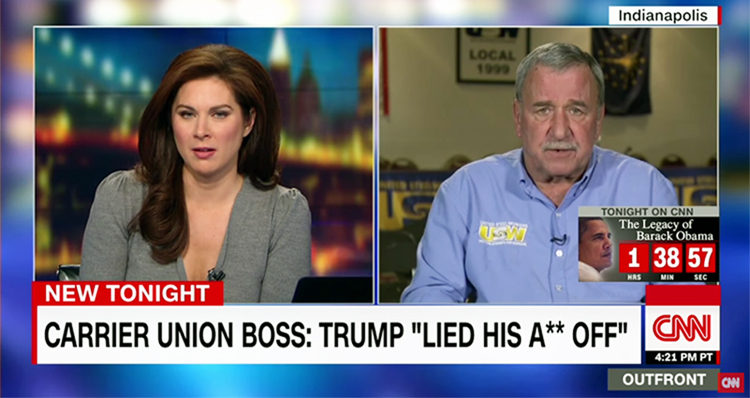 Chuck Jones, president of United Steelworkers 1999 which represents Indianapolis Carrier employees, told NBC News that he has been harassed and threatened after President-elect Donald Trump attacked him on Twitter for fact-checking Trump’s claim that he saved over 1,100 carrier jobs.

As NBC News reports, “Jones has not been shy about telling publications that Trump broke his promise to save jobs at the Carrier plant, a pledge on which the president-elect campaigned.”

The Washington Post reports that Jones initially “felt optimistic when Trump announced last week that he’d reached a deal with the factory’s parent company, United Technologies, to preserve 1,100 of the Indianapolis jobs — until the union leader heard from Carrier that only 730 of the production jobs would stay and 550 of his members would lose their livelihoods, after all.”

Jones was present at a December 1 meeting with Trump and had hoped that Trump would explain himself. “But,” as Jones said on Tuesday, “he got up there and, for whatever reason, lied his a– off.”

“Trump and Pence, they pulled a dog and pony show on the numbers,” Jones continued, adding: “I almost threw up in my mouth.”

NBC News reports that on Wednesday, Trump launched a Twitter assault on Jones and the steelworkers union “20 minutes after Jones appeared on CNN and said 550 jobs were still heading for Mexico from Carrier’s Indianapolis facility, while 700 jobs from its Huntington facility would also be sent to Mexico.”

The argument began when Trump attacked Jones on Twitter accusing him of doing a “terrible job” and blaming him for companies leaving the country.

Chuck Jones, who is President of United Steelworkers 1999, has done a terrible job representing workers. No wonder companies flee country!

Trump followed up an hour later, blaming the union for the lost jobs writing that they should reduce dues and “spend more time working-less time talking.”

If United Steelworkers 1999 was any good, they would have kept those jobs in Indiana. Spend more time working-less time talking. Reduce dues

The union responded a little over an hour later, calling Jones a “hero” who fought tirelessly to “save ALL jobs” at Carrier not just part of them.

Chuck is a hero not a scapegoat: you, others know about Carrier because of his, members' tireless work since day 1 to save ALL jobs there. https://t.co/C9fvwajHY7

And a couple of hours later the union responded to Trump’s call for reduced dues, writing that they have been used to save jobs.

The Washington Post reports that “Half an hour after Trump tweeted about Jones on Wednesday, the union leader’s phone began to ring and kept ringing, he said. One voice asked: What kind of car do you drive? Another said: We’re coming for you.”

“Nothing that says they’re gonna kill me, but, you know, you better keep your eye on your kids,” Jones said later on MSNBC. “We know what car you drive. Things along those lines.”

“I’m getting threats and everything else from some of his supporters. I’m getting them all day long — now they’re kicked up a notch,” Jones told NBC News.  “I tried to correct some of his math, and he took exception to it.”

Brett Voorhies, president of the Indiana AFL-CIO, told The Washington Post that he reached out to Jones about Trump’s attack.

“This guy makes pennies for what he does,” Voorhies said, adding: “What he has to put up with is just crazy. Now he’s just got the president-elect smearing him on Twitter.”

You can watch the interview with CNN’s Erin Burnett, below: