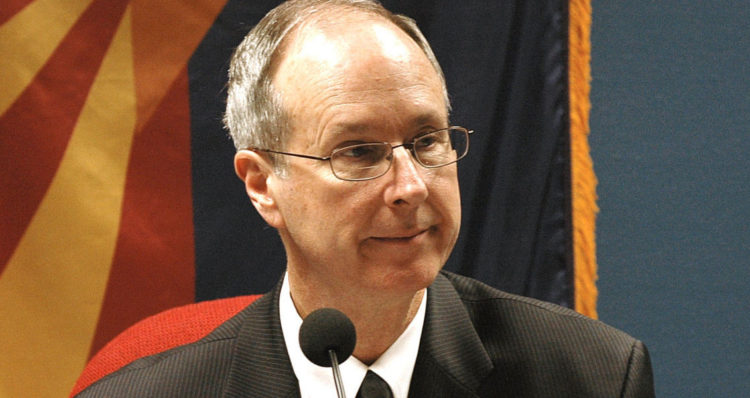 Arizona Republican, Bob Thorpe doesn’t want students to learn about the unfair social constructs that helped place him in a position of power.

We are headed for some scary times, folks.

I imagine when Osama bin Laden was planning the attacks on 9/11, it would have been beyond his wildest dreams to hear that a decade and a half later, United States government representatives would be attempting to strangle American freedom and culture in this regard.

Republican representative from Arizona, Bob Thorpe, has just proposed HB2120. It is a bill which would outlaw any discussion of white privilege, race, effects of poverty, the experiences of people of color, etc., in schools.

Any institution found in violation of the law would be heavily fined. At a time when educational institutions are already being starved for financing, this is a frightening prospect.

Some key parts of the bill are as follows:

It would ban any courses, activities, or events that:

“Are designed primarily for a particular ethnic group.”

“Promote social justice toward a race.”

“Advocate solidarity based on ethnicity.”

Strangely, so as to not appear anti-Semitic, the bill then makes a very particular allowance for any and all discussions of the Holocaust.

Thorpe said Thursday his bill is aimed specifically at things like a “privilege walk” exercise sponsored by the University of Arizona and a course entitled “Whiteness and Race Theory” at Arizona State University.

The former is described in UA literature as helping participants “recognize the privileges that they have been granted and to learn about the backgrounds of their peers.”

Not only is this attempt to dictate what and how educators do their job an insane and chilling overreach of power, but it leaves one wondering why, exactly?

And what has happened in this country that Mr. Thorpe feels emboldened enough to introduce such a bizarre and frankly, HUGE government bill.

Perhaps Mr. Thorpe is desperate. Perhaps he is scared because while although they “won” the election, they can feel the tides of change coming. As this is, frankly, a naked attempt to hide the very sort of social constructs that helped catapult Mr. Thorpe to the level of power he is so clearly ill-suited for.

We Americans who love our country must stand up and fight for it. We must show Mr. Thorpe we will not be silenced and they cannot take everything from us to preserve their power and their greed.