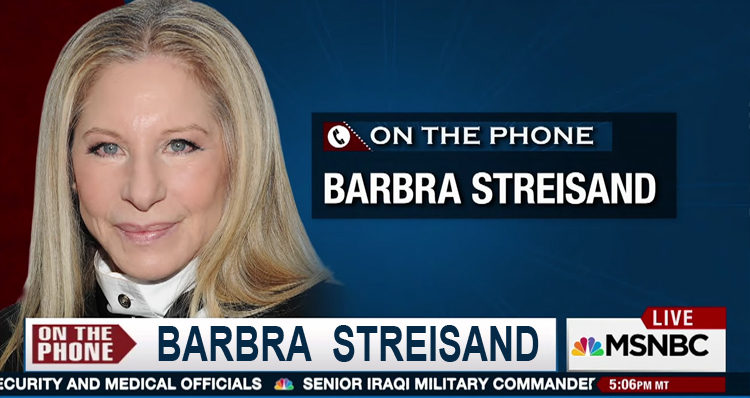 Whatever was going on with her mouth didn’t stop the legendary singer and Hillary supporter from giving full voice to her support of Streep. “I thought that she said what she said beautifully,” Streisand said of the Golden Globes speech, in which the Florence Foster Jenkins actress minced no words in her disgust at Trump’s apparent mocking of a disabled reporter.

“I thought that she said what she said beautifully,” said Streisand, “and I completely agree with Meryl — it was a heartbreaking moment and so beneath the dignity of the presidency, let alone any respectful person. And what we need more in this world is kindness and common decency, and how he reacts and how he has the need to talk back and insult anybody who doesn’t agree with him, that’s pretty disgraceful.”

“What’s the signal to little children who watch television and see this is the behavior of the soon-to-be-president of the United States?” she added.

Reminded by Matthews that Trump has praised Streep in the past, Streisand remarked: “That’s why you can’t trust anything he says because if you get on his wrong side he will blast you negatively.”

When Matthews reminded her that Trump told The Hollywood Reporter in a 2015 interview that Meryl Streep was one of his favorite actresses, Streisand added, “That’s why you can’t trust anything he says.”

Streisand concluded the interview returning her attention back to Streep and then Trump, remarking: “I was very proud of her and she’s a wonderful actress, and that he had to denigrate her talent because she spoke out is – As a matter of fact, why isn’t he sitting through briefings rather than tweeting this nonsense in a rating war with Arnold Schwarzenegger? I don’t know how we’re going to take four years of this.”