January 13, 2017 by Kimberley Johnson No Comments 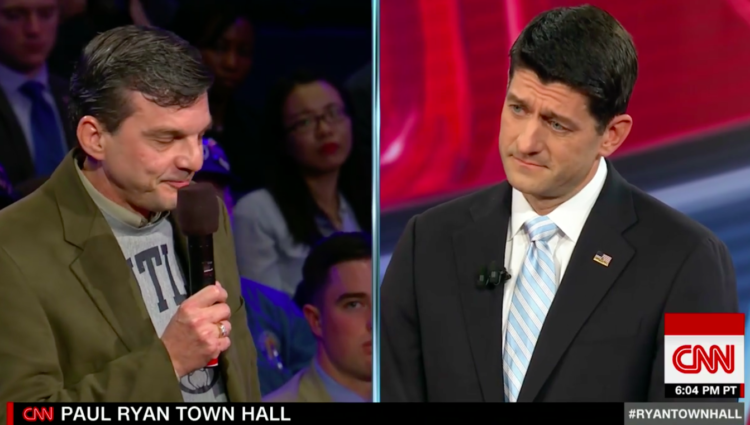 Former life-long Republican and entrepreneur Jeff Jeans attended a CNN town Hall and had the opportunity to share his story with House Speaker Paul Ryan (R-WI). Jeans said he, like Ryan, was originally against Obamacare (The Affordable Care Act).

He’d been such a staunch opponent of the Affordable Care Act that he even told his wife he’d close his business before he complied with the law. But then Jeans was diagnosed with a curable type of cancer:

Ryan stood there listening to him with a forced expression of empathy after a pathetic attempt to lure him back to the Republican Party – which was ignored.

Jeans explained he’d “offered three times the cost of my treatment – which was rejected. They required an insurance card. Thanks to the Affordable Care Act, I’m standing here today, alive.”

Ryan responded with “We want to replace it with something better.” However Ryan had no alternative to offer because Republicans have not come up with any viable alternative since the ACA’s inception. (Keyword: viable.)

All Ryan was able to offer Jeans was, “I’m glad you’re standing here. I mean, really …  seriously … no, really, uh …” Jeans interrupted him and said, “I want to thank President Obama from the bottom of my heart because I would be dead if it weren’t for him.”

Not only do Republicans want to strip healthcare from millions of Americans with no replacement, some Republican voters are under the mistaken impression that Obamacare is something altogether different than the Affordable Care Act.

Watch the exchange below: