Mark Zuckerberg Stands Up To Trump 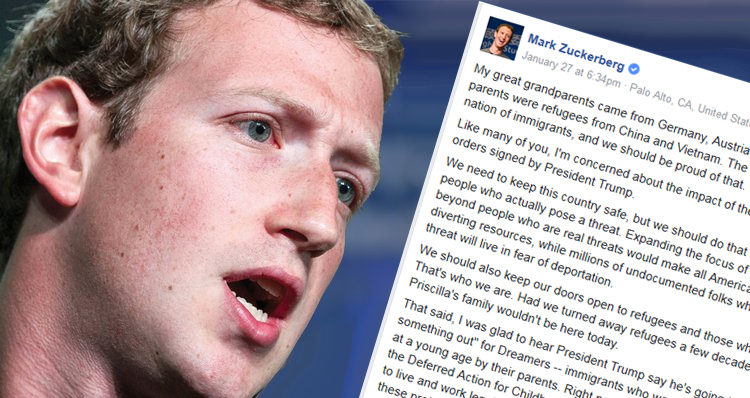 Facebook Chief Executive Mark Zuckerberg was quick to respond, taking to his Facebook profile to remind Trump that “the United States is a nation of immigrants, and we should be proud of that.”

Noting that his great grandparents were immigrants and his wife’s parents were “refugees from China and Vietnam,” Zuckerberg adds that “like many of you, I’m concerned about the recent executive orders signed by Trump.”

“We need to keep this country safe, but we should do that by focusing on people who actually pose a threat,” he continued, warning that: “Expanding the focus of law enforcement beyond people who are real threats would make all Americans less safe by diverting resources, while millions of undocumented folks who don’t pose a threat will live in fear of deportation.”

He concludes by writing that he hopes Trump will make good on his promise to “‘work something out for dreamers’ – immigrants who were brought to this country at a young age by their parents,” that “These issues are personal for me even beyond my family. A few years ago, I taught a class at a local middle school where some of my best students were undocumented. They are our future too. We are a nation of immigrants, and we all benefit when the best and brightest from around the world can live, work and contribute here. I hope we find the courage and compassion to bring people together and make this world a better place for everyone.”

The post has been shared over 90K times, and received over 15k comments.

Responses were mixed with many seeming to equate being a refugee or a Dreamer with being a criminal: “Undocumented means illegal… plain and simple… no different calling a drug dealer a street pharmicist.. if i break the law as american citizen i get fined or arrested and brought before a judge to answer the citiation….“

Yes, many others applauded his efforts to push back on Trump’s repressive agenda while at the same time asking for better filters on Facebook when it comes to racist, anti-immigrant posts.

What are your thoughts on Trump’s immigration order? Let us know in the comments section, below.