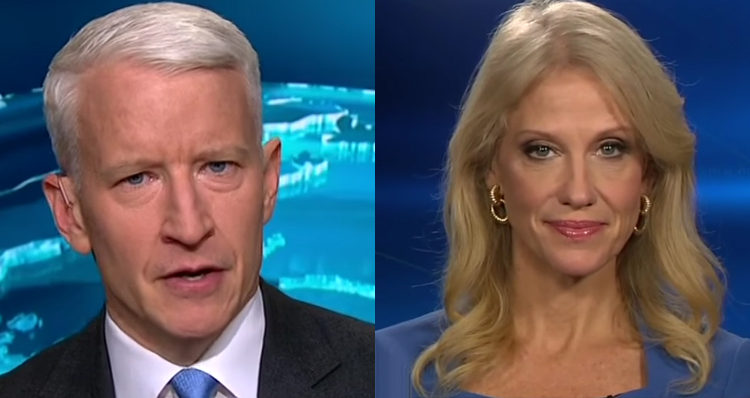 Kellyanne Conway and CNN’s Anderson Cooper clashed in an interview over CNN’s reporting of the classified documents presented to President Obama and President-elect Trump including allegations that Russian operatives claim to have compromising personal and financial information about Trump.

As CNN reports, “Conway, the senior adviser to President-elect Donald Trump vehemently denied a report that intelligence officials presented Trump with claims of Russian efforts to compromise him.”

The two went back and forth, arguing for about ten minutes about the issue with Conway insisting that CNN’s reporting was inaccurate and that the information regarding Russian efforts to compromise Trump was not presented to him, although she readily admitted that she was not present during Trump’s intelligence briefing.

“It’s not true,” Conway told Cooper when asked about it, adding that “We don’t discuss the classified information that is discussed”

“But you just said that it wasn’t true,” Cooper responded.

Conway repeatedly accused CNN of linking to an article by BuzzFeed containing the 35-page memo regarding Russia and Trump, and Cooper repeatedly advised her that CNN had not linked to BuzzFeed. At one point Cooper went to the CNN article to look for the link, proclaiming: “There’s no link to Buzzfeed. Full stop.”

Not willing to let the matter drop, Conway took to her Twitter account after the show, linking to an image from the CNN article showing a link and falsely claiming – once again – that CNN had linked to the BuzzFeed article.

In turn, she was fact-checked by Jim Sciutto, CNN’s Chief National Security Correspondent, who responded: “in fact, @KellyannePolls, this links to @DylanByers story on the controversy: http://money.cnn.com/2017/01/10/media/buzzfeed-trump-report/ … Not to buzzfeed story on dossier.”

in fact, @KellyannePolls, this links to @DylanByers story on the controversy: https://t.co/NufJL9qfHA Not to buzzfeed story on dossier https://t.co/W4d5SFRowW

You can watch the fiery exchange below: