" /> All Hell Breaks Loose At U.S. Airports Due To Trump's Immigration Order

All Hell Breaks Loose At U.S. Airports Due To Trump’s Immigration Order 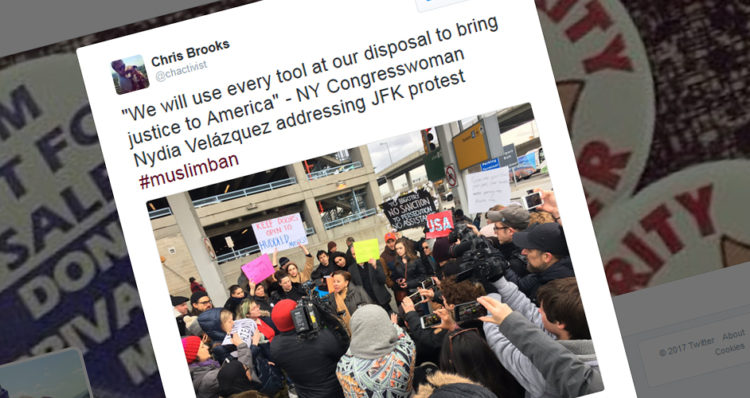 Members of Congress are currently at airports nationwide as arrests and protests erupt in the wake of Trump’s immigration orders.

In the absence of any government experience, Trump signed immigration orders on Friday; and it appears there were no orders or instructions for Customs and Homeland Security officials.

A friend is at JFK International Airport in New York and has posted the following distressing message: “JFK airport is a mess. The White House did nothing to prep customs and border patrol to deal with the consequences of executive order. Green card holders were handcuffed, their social media was reviewed, and they were asked their views on Trump. Congressman are currently at airports all across the nation to aid refugees. This is terrible.”

Wanting to confirm that this is actually happening in America, I went to Google and these are some of the headlines that have come out in the last 24 hours:

As CNN reports, the legality of Trump’s executive order titled “Protection Of The Nation From Foreign Terrorist Entry Into The United States” is raising questions regarding its legality.

“What this order does is take people who played by the rules who have been rigorously vetted and slams the door of the country in their face because of their religion,” said David Leopold, an immigration attorney and the former president of the American Immigration Lawyers Association.

CNN continues, reporting that “The countries impacted are Iran, Iraq, Syria, Sudan, Libya, Yemen and Somalia, according to a White House official. It also caps the total number of refugees admitted into the United States during the 2017 fiscal year at 50,000, down more than half from the current level of 110,000.”

“I am establishing new vetting measures to keep radical Islamic terrorists out of the United States of America,” Trump said during the signing, adding: “We don’t want them here.”

Word of the protests quickly spread on social media:

"We will use every tool at our disposal to bring justice to America" – NY Congresswoman Nydia Velázquez addressing JFK protest #muslimban pic.twitter.com/whmPWBz91C

The non-profit New York Taxi Drivers tweeted: “Today, drivers are joining the protest at JFK Airport in support of all those who are currently being detained #NoBanNoWall.”

Today, drivers are joining the protest at JFK Airport in support of all those who are currently being detained #NoBanNoWall

And, as NBC News New York reports: “U.S. Representatives Jerry Nadler and Nydia Velazquez met with Customs and Border Patrol supervisors at the airport as the two worked to provide legal access to the detainees.”

You can watch a CBS News video, below, of Hameed Jhalid Darweesh, an Iraqi refugee, giving a press conference amid protests after being released after being detained at JFK airport just one day after President Trump’s executive order banning immigration to the U.S. for passport holders from seven Muslim-majority countries.