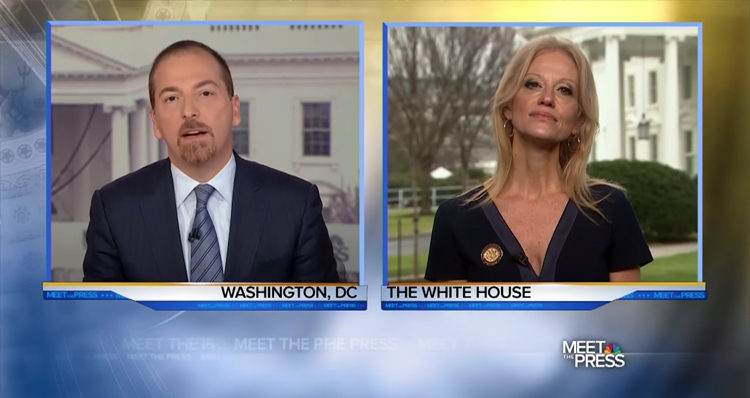 Kellyanne Conway threatens the media during a contentious interview with NBC’s Chuck Todd.

NBC News reports that on Saturday, Trump’s new press secretary told a host of lies to reporters during his first press conference.

White House Press Secretary Sean Spicer gathered the press to deliver a five-minute statement Saturday in which he issued multiple falsehoods, declaring erroneously the number of people who used the D.C. metro on Friday, that there was a change in security measures this year and that “this was the largest audience to ever witness an inauguration, period, both in person and around the globe.”

“These attempts to lessen the enthusiasm of the inauguration are shameful and wrong,” Spicer added.

Trump advisor Kellyanne Conway lashed out at the media during a contentious interview with NBC’s Chuck Todd on Sunday after being cornered about those lies.

Chuck Todd began by asking Conway about why Trump found it necessary to send out his press secretary to lie during his very first press conference:

Why did the president send out his press secretary, who’s not just the spokesperson for Donald Trump. He could be– He also serves as the spokesperson for all of America at times. He speaks for all of the country at times. Why put him out there for the very first time in front of that podium to utter a provable falsehood? It’s a small thing. But the first time he confronts the public it’s a falsehood?

Conway responded by threatening the future relationship of the administration and the press.

“Chuck, I mean, if we’re going to keep referring to our press secretary in those types of terms I think that we’re going to have to rethink our relationship here,” she responded, later adding that the press is “presumptively negative.”

The two argued back and forth with Todd clearly not willing to let go of the lies presented to the media by the new press secretary.

“Answer the question of why the president asked the White House press secretary to come out in front of the podium for the first time and utter a falsehood? Why did he do that? It undermines the credibility of the entire White House press office,” Todd pressed.

Conway responded that it did not undermine the credibility of the White House press office, adding that Spicer was merely presenting “alternative facts” when telling the media that the number attendees at Trump’s inauguration was “the biggest ever.”

“Don’t be so overly dramatic about it, Chuck. What– You’re saying it’s a falsehood. And they’re giving Sean Spicer, our press secretary, gave alternative facts to that. But the point remains,” she continued.

Amid a near constant stream of interruptions, Todd continued to press the matter telling Conway: “What I don’t understand is that is not what yesterday was about. So you have not answered the qu– you did not answer the question the– you sent the press secretary out there to utter a falsehood on the smallest, pettiest thing and I don’t understand why you did it.”

Conway attempted to dismiss the matter at that point by claiming it was impossible to estimate crowd numbers, although the administration has been actively doing so – continuously claiming that Trump’s inauguration ceremony was the largest ever.

“Look, I actually don’t think that– maybe this is me as a pollster, Chuck. And you know data well. I don’t think you can prove those numbers one way or the other. There’s no way to really quantify crowds. We all know that. You can laugh at me all you want.”

You can watch that exchange in clip, below and you can read the full transcript of Sunday’s “Meet The Press” here.