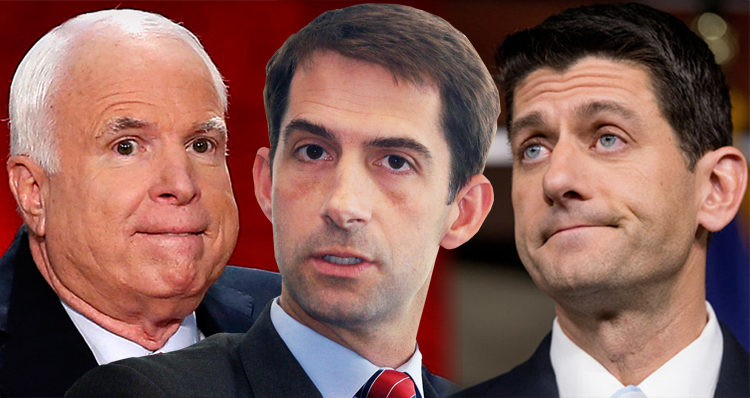 Republican hypocrisy is on full display  the wake of the White House’s announcement that Pres. Obama had commuted the sentence of Chelsea Manning, the former Army intelligence analyst serving 35 years for giving classified information to WikiLeaks.

Republican response to Manning’s commutation was swift, and at times brutal, as reported by Business Insider.

“This is just outrageous,” Speaker Paul Ryan (R-WI) said in a statement, adding that: “Chelsea Manning’s treachery put American lives at risk and exposed some of our nation’s most sensitive secrets. President Obama now leaves in place a dangerous precedent that those who compromise our national security won’t be held accountable for their crimes.”

The infamous Sen. Tom Cotton (R-AR), a veteran who led the Republican efforts to undermine Obama’s Iran negotiations, posted a statement on his website that read: “”When I was leading soldiers in Afghanistan, Private Manning was undermining us by leaking hundreds of thousands of classified documents to WikiLeaks. I don’t understand why the president would feel special compassion for someone who endangered the lives of our troops, diplomats, intelligence officers, and allies. We ought not treat a traitor like a martyr.”

Sen. John McCain (R-AZ), chairman of the Senate Armed Services Committee, called the commutation a “grave mistake,” that “will encourage further acts of espionage and undermine military discipline,” adding that “It is a sad, yet perhaps fitting commentary on President Obama’s failed national security policies that he would commute the sentence of an individual that endangered the lives of American troops, diplomats, and intelligence sources by leaking hundreds of thousands of sensitive government documents to Wikileaks, a virulently anti-American organization that was a tool of Russia’s recent interference in our elections.”

The New York Daily News reports that Trump was “troubled” by the decision to commute Manning’s sentence. His incoming press secretary elaborated during the Trump transition team’s daily conference call, telling reporters: “You have an individual who was convicted of espionage and sentenced to spend 35 years in jail and after the outrage that we’ve seen about other leaks, and issues that have come up, to see someone who has given away this country’s secrets, and been convicted of it through a military court, it’s disappointing and it sends a very troubling message when it comes to the handling of classified information, and to the consequences to those who leak information that threatens the safety of our nation.”

The Commutation of Lewis “Scooter” Libby

The story of Valerie Plame and Lewis “Scooter” Libby serves as a stark contrast to that of Chelsea Manning.

Libby was indicted in 2005 and convicted in 2007 for having “leaked” classified employment information about Plame, who was the wife of Iraq war critic Joseph C. Wilson and a covert CIA agent.

The Independent reported in a 2011 follow-up piece that Plame’s identity was leaked to Washington Post columnist Robert Novak in 2003.

It was leaked by Karl Rove, president George W Bush’s mastermind, and Lewis “Scooter” Libby, Dick Cheney’s chief of staff, in an attempt to discredit Plame Wilson and her husband Joe. She had been involved in finding intelligence that showed Iraq had no active nuclear weapons program[me], contrary to the belief and desires of many of the US government.

When the Wilsons campaigned that it was treason to expose an agent, Bush retorted that she was “fair game”.

CNN reported in 2007 that: “Plame had worked in the CIA’s counter-proliferation division before the March 2003 invasion. She told a congressional committee in March that her exposure effectively ended her career and endangered ‘entire networks’ of agents overseas.

Shortly after his sentencing hearing, Bush stated on camera that he would “not intervene until Libby’s legal team has exhausted all of its avenues of appeal” that “it wouldn’t be appropriate for me to discuss the case until after the legal remedies have run its course.” [From Bush, New York: Simon & Schuster, July 2016 (ISBN 9781476741192)]

However, less than a month later, on July 2, 2007, Bush commuted Libby’s prison sentence.

The move by Bush was criticized by many at the time. The Los Angeles Times reported at the time that: “Sentencing experts said Bush’s action appeared to be without recent precedent. They could not recall another case in which someone sentenced to prison had received a presidential commutation without having served any part of that sentence. Presidents have customarily commuted sentences only when someone has served substantial time.”

“We can’t find any cases, certainly in the last half century, where the president commuted a sentence before it had even started to be served,” said Margaret Colgate Love, a former pardon attorney at the Justice Department. “This is really, really unusual.”

Said Ellen S. Podgor, a professor at Stetson University law school: “This is a classic case of executive activism as opposed to judicial activism.”

Despite the severity of the charges against Libby and the near total lack of precedent for a presidential commutation, Republicans were quick to praise the decision by Bush.

Libby’s former boss, Vice President Dick Cheney, argued with Pres. Bush that Libby was unfairly charged by a politically motivated prosecution, and it was reported by Time Magazine that he believed that the commutation fell short.

Below are some additional Republican responses, courtesy the reader-supported website ShadowProof:

The hypocritical distinction between Republican response to Chelsea Manning’s clemency and that of Scooter Libby is aptly demonstrated by White House spokesman Josh Earnest’s response last Friday to questions presented by reporters regarding a possible pardon of noted whistle blower Edward Snowden.

As MSN reports, Earnest told reporter that “Chelsea Manning is somebody who went through the military criminal justice process, was exposed to due process, was found guilty, was sentenced for her crimes, and she acknowledged wrongdoing.”

And there is no doubt that Libby’s outing of Plame as a CIA operative damaged national security.

As The Nation reported at the time of Libby’s clemency,

Valerie [Plame] was operations chief at the Joint Task Force on Iraq of the Counterproliferation Division of the CIA’s clandestine operations directorate… As part of her job, she traveled overseas under cover. CBS News recently reported that it had confirmed she had also worked on operations designed to prevent Iran from obtaining or developing nuclear weapons…

Appearing before the House government oversight and reform committee in March, she testified the she was a “covert officer” who had helped to “manage and run operations.”…

Yes, this was a case of putting politics (getting Joe Wilson) ahead of national security concerns (such as protecting the identity and operations of a CIA officer working the WMD beat). …

The bottom line: this episode demonstrated that the Bush White House was not honest (the vice president’s chief of staff was even convicted of lying to law enforcement officials), that top Bush officials had risked national security for partisan gain, and that White House champions outside the government would eagerly hurl false accusations to defend the administration.

On the flip-side, here are some of the responses by Democrats, published by CNN in 2007: