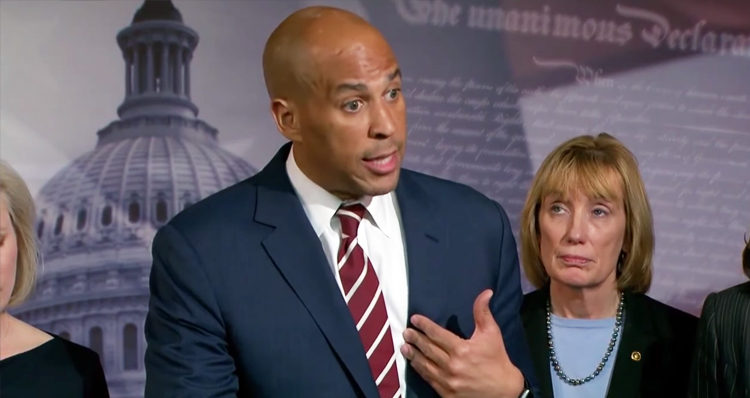 This is what Resistance Looks Like: Cory Booker educates Republicans as he takes the microphone to defend Planned Parenthood.

Republican Speaker Paul Ryan announced last week that upcoming legislation to repeal Obamacare would cut off taxpayer money to Planned Parenthood despite the fact that abortion is a legal, constitutionally-protected and necessary component of women’s healthcare and despite the fact that federal law prohibits any federal funding for abortion.

However, Democratic Senator Cory Booker (NJ) stood up and showed Republicans what resistance looks like when he took the microphone at a press conference last week to defend Planned Parenthood and the many women who use their services.

Explaining that he observed first-hand what happened when Republican Gov. Chris Christie cut funding to Planned Parenthood in New Jersey, Booker proclaimed that “This is a moment in America.”

“Republicans now think they’re elected with a mandate to do these kind of things,” he continued, adding “I saw just this week the craven overreach of the Republican Party when they tried the, Republican GOP, to gut Independent Ethics Oversight. And what we saw there was the American people standing up and saying ‘We will not tolerate this!’ and so this is another point. We see that they will listen if enough people stand up and fight.”

“And so this is the first shot in what is going to be a battle leading into real reconciliation. And if enough Americans stand up and say we’re not going to tolerate this. We didn’t elect anybody to rip out the key preventive services to make it harder to be someone struggling in this country to get basic healthcare services, that I believe in women, that I believe fundamentally in this country and that institutions like this make a stronger, better, more intelligent, more compassionate, more loving.”

Booker concluded, vowing to spend “every single day” fighting for Planned Parenthood, “leading the group reconciliations… trying to wake up the conscience of other folks, trying to call to people to protest, to fight, to stand up. Because this cannot be allowed to happen. Too many people will suffer. The consequences will be felt by all.”

It is important to note that Republicans have been on a crusade to defund Planned Parenthood for years, that the last big push came in the wake of the release of a series of edited, undercover videos revealing conversations with PP officials discussing the sale of aborted fetal tissue. However, last August the New England Journal of Medicine (NEJM) debunked those heavily edited videos in a series of articles.

And, as The New York Times reported last year, the activists involved in those videos were indicted on charges related to tampering with government records. Those charges were later dropped but not on the merits of the case. Instead, they were dropped due to a technical issue regarding a “potential legal issue with the grand jury’s term, which had been extended during the investigation” according to The New York Times report.

You can watch Cory Booker speaking with reporters in the clip, below: