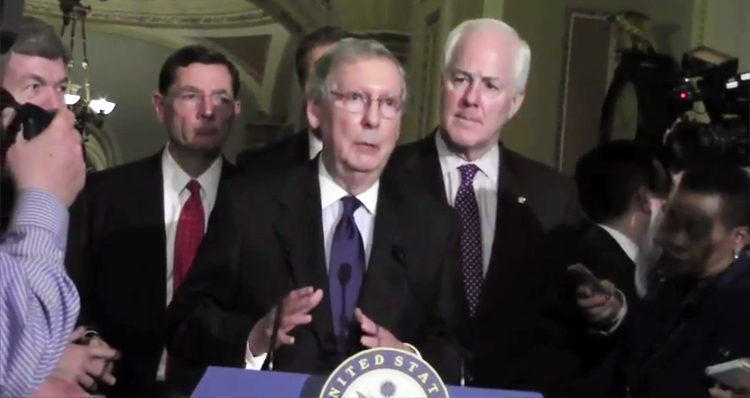 The stunning hypocrisy of Mitch McConnell is on full display this week, but do you remember the time he sounded like a stammering fool during a press conference?

As The Daily Beast reported yesterday, McConnell whimpered at a press conference that “I noticed my counterpart Sen. Schumer announced yesterday that their goal was apparently to never fill the Supreme Court vacancy….. I think that’s something that the American people simply will not tolerate, and we’ll be looking forward to receiving a Supreme Court nomination and moving forward on it.”

This, of course, comes in the wake of Republicans’ refusal to hold hearings on President Obama’s nominee, Merrick Garland, whose nomination expired the day before as reported by Huffington Post.

And who can forget McConnell’s remarks to the National Journal just prior to the 2010 mid-term elections when he stated that: “The single most important thing [Republicans] want to achieve is for President Obama to be a one-term president.”

More recently and perhaps more entertaining, however, is a 2013 press conference when McConnell ended up sounding like a stammering fool, repeating himself three times in an effort to dodge a question regarding possible ethics violations by his office during his 2014 bid for reelection.

As reported by Mother Jones at the time a secret recording from February 2013 had been revealed in which McConnell and his aides were captured discussing how they could attack Ashley Judd who was considered a serious contender for the Senate seat held by McConnell.