January 25, 2017 by Kimberley Johnson No Comments 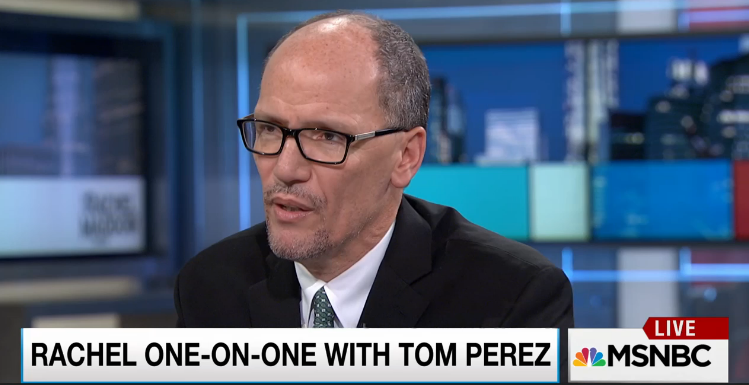 Former Obama Labor Secretary Tom Perez is running for chair of the Democratic National Committee, and there’s a strong case to be made in his favor. He understands the urgent need to implement a 50-state strategy and the importance of working 12 months a year.

“At the Labor Department, Perez was in charge of an organization with 17,000 employees, a multibillion-dollar budget, and offices throughout the nation. And he pocketed a number of policy wins. He expanded the overtime rule for millions of workers. He helped resolve the Verizon strike and achieved protections for Verizon’s retail workers. On his watch in 2016, the department collected $266 million in back pay owed to workers. He pushed for expanded paid sick leave. The department issued a new rule to protect workers in construction and manufacturing from exposure to dangerous levels of silica dust, which can cause disease and cancer. It raised the minimum wage and provided extended overtime protections for 2 million home health care workers. The department issued an important conflict-of-interest rule forcing retirement advisers to place clients’ interests ahead of their own, an Elizabeth Warren-like measure that could save Americans billions of dollars per year.”

In an interview with Rachel Maddow on Tuesday, Perez made a convincing argument as to why he should be the next DNC chair.

Here’s a sample of Perez’s comments to Maddow:

“You know, there’s a crisis of confidence right now in the Democratic
National Committee, and we need a leader who can inspire people, who can
take the fight to Donald Trump, who can appeal to every stakeholder in our
big tent – and I think our big tent is one of our biggest strengths – and
who understands how to take this complex organization that isn’t firing on
all cylinders and move it forward.”

He went on to say:

“… And so, we’ve got to go back to basics as a party. We’ve got to – we’ve
got to make sure that every state has a vibrant party where we are
recruiting candidates, where we are organizing as a four-year, 12-month-a-
year enterprise, where we are working side by side.

“And we’ve got to change this culture of the DNC from this top down sort of
culture to a culture where we’re working together with states, because the
Democratic Party can’t be the party of the West Coast and the East Coast
and a couple states in between. We can compete everywhere if we are mining
the basics and we lost sight of the basics. Data analytics are fine and
they`re important but they can`t supplant good old-fashioned house calls.”

The TRMS interview is approximately 10 minutes and it’s worth watching.