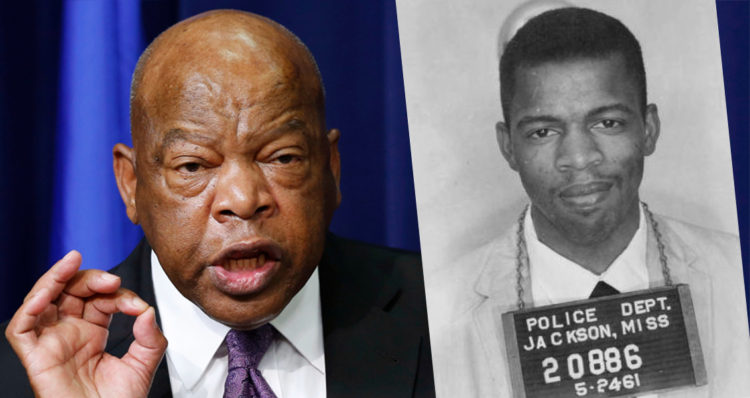 NBC News reports that: “Lewis rankled President-elect Donald Trump when he told NBC News’ ‘Meet the Press’ in an exclusive interview on Friday that he does not believe Trump is a ‘legitimate president.’ The comment provoked Trump to lash out at the congressman, decrying him on Twitter Saturday as ‘all talk, talk, talk – no action or results.'”

“I think the Russians participated in helping this man get elected, and they helped destroy the candidacy of Hillary Clinton,” he added.

As The Guardian reports, “The criticism of US congressman John Lewis came on the day of a civil rights march in Washington aimed at Trump’s incoming presidency, two days before America observes the annual Martin Luther King Jr Day and six days before the country’s first black president leaves office.”

“Lewis, who was beaten by state troopers during the historic 1965 march over the Edmund Pettus Bridge in Selma, Alabama, is the first leading Democrat to publicly question Trump’s right to govern,” continued The Guardian, adding that: “The 76-year-old congressman from Georgia, seen by some as the moral conscience of the nation, will boycott Trump’s inauguration, the first he has missed since becoming a member of Congress three decades ago.”

House Minority Leader Nancy Pelosi defended Lewis, tweeting that those who have tried to silence him in the past have failed.

Ahead of #MLKday2017, let us remember that many have tried to silence @repjohnlewis over the years. All have failed.

NBC News notes that more backlash is expected, that by challenging Lewis, Trump “could end up pushing more members of his own party to skip Friday’s presidential inauguration in protest.”

I stand with @repjohnlewis and I will not be attending the inauguration. pic.twitter.com/z8Q0wA9OPK

I will NOT attend the inauguration of @realDonaldTrump. When you insult @repjohnlewis, you insult America.

As The Guardian reports,

Evan McMullin, a former CIA officer who ran as an independent conservative in the presidential election, said: “While you avoided the draft, John Lewis risked his life for equality in America. You’ll never even dream of such selfless patriotism, Donald.”

Howard Wolfson, a former deputy mayor of New York, commented: “John Lewis did more to make America great in one day on the Edmund Pettus Bridge than Donald Trump ever will.”

On this Martin Luther King Jr. weekend, let it be clear that John Lewis is an American patriot. Trump's attacks on him further confirm it. pic.twitter.com/WavPT36Atu