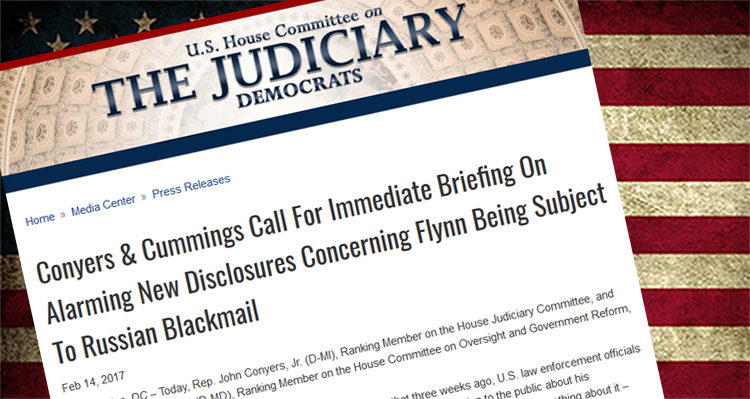 Representatives Conyers & Cummings are calling for an immediate briefing explaining why Michael Flynn was not dismissed 3 weeks ago.

NBC News reports that “Michael Flynn abruptly resigned as President Donald Trump’s national security adviser Monday night, hours after it was learned that the Justice Department informed the White House that it believed he could be subject to blackmail.”

The New York Times elaborated on the potential for blackmail Monday night, reporting that:

The acting attorney general informed the Trump White House late last month that she believed Michael Flynn had misled senior administration officials about the nature of his communications with the Russian ambassador to the United States, and warned that the national security adviser was potentially vulnerable to Russian blackmail, current and former U.S. officials said.

The message, delivered by Sally Q. Yates and a senior career national security official to the White House counsel, was prompted by concerns that ­Flynn, when asked about his calls and texts with the Russian diplomat, had told Vice ­President-elect Mike Pence and others that he had not discussed the Obama administration sanctions on Russia for its interference in the 2016 election, the officials said. It is unclear what the White House counsel, Donald McGahn, did with the information.

The joint statement by Cummings and Conyers reads as follows:

“We were shocked and dismayed to learn this evening of reports that three weeks ago, U.S. law enforcement officials warned the White House Counsel that General Flynn had provided false information to the public about his communications with the Russian government, but that the Trump Administration apparently did nothing about it – neither to clarify the truth to the American public or to stop General Flynn from being an ongoing national security concern.

“Just a few hours before he resigned, Kellyanne Conway said Mr. Trump had “full confidence in Flynn.” The reality is General Flynn was unfit to be the National Security Advisor, and should have been dismissed three weeks ago.   Now, we in Congress need to know who authorized his actions, permitted them, and continued to let him have access to our most sensitive national security information despite knowing these risks.  We need to know who else within the White House is a current and ongoing risk to our national security.

“While Congressional Republicans have turned a blind eye to their constitutional duty to conduct oversight on these issues, we Democrats believe that this new disclosure warrants a full classified briefing by all relevant agencies, including the Department of Justice and the FBI, as soon as possible and certainly before Thursday, February 16.  We are communicating this request to the Department of Justice and FBI this evening.”